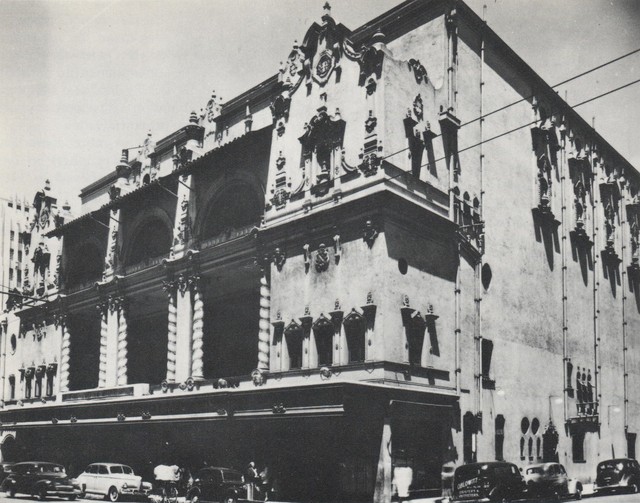 South Africa’s finest Atmospheric style theatre was designed in 1928 by architect P. Rogers Cooke. It opened in 1929 and had a Wurlitzer 2Manual/8Ranks theatre pipe organ installed which was opened by Max Bruce. The organ was moved to the Bijou Theatre, Cape Town in 1931.

The organ that was originally in the Alhambra Theatre was installed in the Nico Milan/Artscape Theatre, Cape Town in 1998.

Theatre opened on 2 December 1929.Marlene Dietrich appeared on stage her in April 1966.

Yes i recall the lovely Alhambra Theatre very well too,with its lovely Twinkling Ceiling as was said by (yuri) also the very plush Curtaining and the lovely works on the walls.
The seating was superb,with the Royal Balcony being the best seats in the House,i always tried to get seats in the Upper Circle which were very good too.
Then thre was the period that they used to have Midnight Shows there as well,and you had to go early to get a seat as the Midnight Shows proved to be so ver popular.
there was also one show i will never forget and that was when Jonny (Cryboy) Ray came there and i was not fortunate to get an inside Ticket,but thankfully they had Speakers on the outsides (the Streets were packed) and eventually Johnny Ray came out on the top Balcony and sang to us in the Street,anyone remember that night?? It was GREAT!!!

I was too young to be let out after sunset…I only remember the King and I.

Theatre was demolished in 1974.

In 1929, the Alhambra Theatre acquired its name from an earlier cinema across the street situated at 4 Riebeek Street, to suit it’s Moorish architectural theme. The original “Alhambra” in turn acquired the new name “Royal Theatre”.

Michael vd Leer mentions the original Alhambra in Riebeeck Street. It was designed in 1911 by the architects MacGillivray & Grant for Wiener & Co. The projected cost was 7,000 pounds but it cost more than that because a sliding roof was added.

WH Grant was to go on to design the chain of cinemas down the Cape Peninsula in the late ‘30s and early '40s including the Scala, Savoy, Bijou, Empire, etc. Also the Protea in Paarl, the Colosseum in Cape Town and the Del Monico Palais de Danse.

As this is also about the Theatre and Del Monico,i wonder if there is anyone who may have a Pic of the Del Monico and was it in Longmarket Street ??
Thanks you in advance