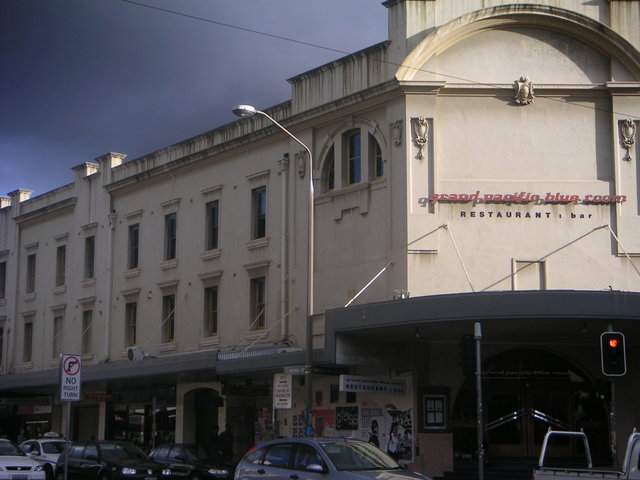 Opened on 26th December 1911 as West’s Olympia Theatre, in the Sydney inner-city suburb of Darlinghurst, this immense picture palace seated 2,500 on two levels. The opening film was “The Power of Love”

Renovated in 1920 it came under Union Theatres combine. It was claimed to also be Sydney’s first suburban cinema to install ‘talkies’. Under Greater Union Theatres' control in the 1930’s, some modernization was carried out in the mid to late-1930’s, including a new proscenium, wall decorations, and auditorium light fittings. Seating capacity was reduced to 1,741. Renovated and renamed the Odeon in 1953 or 1954, the theater closed again in 1960; reopened 22nd August 1969 as the Mandala Cinema, the home of cult and rock films.

Closed once more in 1972, the theater was converted into Sydney’s first twin cinema. The Academy Twin Cinemas opened on 29th June 1973, with “Fritz The Cat” and Roman Polanski’s “Macbeth”. Designed by architects H.O. Woodhouse & Danks, the Academy Twin screens mostly art house films. The cinemas are quite spacious but without curtains. There is raked seating and some timber panelling on walls.

Eventually, the original theatre was totally gutted and rebuilt into shops, offices, apartments, restaurant, and a community center for the Greek Orthodox community, with the twin auditoriums being located on the ground floor level and a new entrance from Oxford Street, in the heart of Sydney’s ‘Great Gay Way’.

No vestige remains of the old theatre interior, although the Edwardian facade is the same as the 1911 building, minus the decorative portico. The cinemas seated 478 and 291 respectively, and were known as Cinema 500, Cinema 300. The Academy Twin Cinemas were closed by the Palace Cinemas chain on 27th June 2010.

Between 1960 and 1968 it ran Greek films as did many other suburban cinemas in Sydney; They were operated by Mr Chris Louis and his family who are a great immigrant success story in Sydney. Pre TV they might have been allowed a quiet night to rent a cinema to show a European film, then, post TV they were offered the freehold for about 10c each. They bought them up and become one of the biggest cinema owner chains in Sydney, saving a dozen or so from the bulldozer. It was because of their film interests that many suburban cinemas remained: the Redfern Lawson, the Rosebery Marina, The Earlwood Chelsea, Enmore Hoyts, Newtown Hub, and with cousins in Melbourne, the same deal. Some remain, some are dilapidated and some, like Enmore are a major showplace. this one was twinned and still is today, Sydney’s major Arthouse venue.

We came to live in Sydney in 1953 and lived in Albion St, Surry Hills. So Old West, as I remember everyone calling it, was the local theatre. I really cannot remember anyone calling it the Odeon.

I can very clearly remember seeing some movies at this theatre. I particularly remember Calamity Jane with Doris Day and The African Queen with Hepburn and Bogart. I also remember Abott and Costello Go To The Moon!!! I am sure I saw many more movies but for some reason they are the three that come to mind most easily. We went very regularly on Friday and Saturday nights. After all, no TV in those days.

Every time I am in Sydney and drive along Oxford St I look at the building with great nostalgia. To this day I watch my DVD copie sof Calamity Jane and The African Queen. I guess going to the Odeon/Old West was part of my film upbringng.

Closure of Academy Cinemas was announced today in the Sydney Morning Herald. They are to be closed down on June 27. There is a dispute with the landlord over a number of issues involving upgrading.

It was actually the SECOND twin to open in Sydney. Village Double Bay opened in December 1 1972.