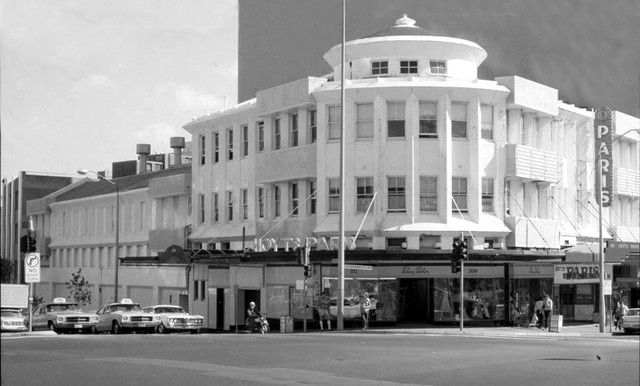 Located in downtown Sydney, it started its life as the Australian Picture Palace when it opened on 7th January 1916. It was designed by architect WalterBurley Griffin.

On 9th November 1935, the theatre was renovated and renamed the Tatler Theatre. The theatre then switched to showing second or third run films on a weekly basis. In 1943, Warner Bros. and Hoyts could not agree on contract terms and Warners amassed a large stockpile of unreleased films. A company known as ‘Austral American Productions’ came to an exclusive arrangment with Warner Bros. to release Warner films.

The Tatler Theatre re-opened as a first run theatre on August 5, 1943, with the film “They Died with their Boots On” starring Australia’s Errol Flynn. Just three years later, the theatre switched formats once again; this time to revival screenings. Patronage was declining, so, in 1949, another change brought ‘live’ revue acts on stage, with two shows a day. Unable to find an audience, the Tatler Theatre closed for good a year later, in 1950.

In 1952, the theatre was purchased by the Hoyts Theatres circuit, refurbished, and renamed the Park Theatre. In 1954, it became the Paris Theatre and continued under that name until Hoyts left the theatre in 1977, after opening their new seven-cinema complex three blocks away in George Street, Sydney.

After Hoyts vacated, the theatre continued to operate for a few years showing films and ‘live’ theatre before it closed and was eventually demolished in 1981.

Today, the corner site is now a towering apartment building, housing not only the YMCA, but a Mormon Chapel as well. This spot, overlooking beautiful Hyde Park, is considered to be one of the best real estate locations in Sydney.

Joe; Nice link, but the Crystal Palace Theatre was on George Street, Sydney. It opened in June 1914 and was demolished in 1937 for the new Century Theatre to be built on the site. It too has since been demolished.

This was the very first proper picture theatre that I, a young boy from a northern NSW country town, ever visited. It was in 1954, the Disney movie “The Living Desert” was featured, I was 9 years old and holidaying in The Big Smoke with my grandparents.

For a kid who only ever watched “pitchers” in the local School of Arts (which every country town seemed to have), the Paris was like another planet to my 9-year old senses! Great memories, deeply etched.

Oddly, when I grew up and later went to Sydney to work, I ended up in an office building in Goulburn street, just around the corner from the Paris, and saw its demolition.

Just wondering if anyone knows how big the lobby was of the Paris Theatre back in the 1920s. Writing a novel and doing some research. Any lead would be appreciated.

The cinema had a dreadfully very,very small screen for screening 70mm films. What a waste of 70mm.

I recollect going to this cinema at the southern end of Hyde Park in the late 60s & early ‘70 to see 'Midnight Cowboy’ (an appropriate place to watch it, being situated right on the edge of where Sydney ’s notoriously famous Oxford Street starts!). I remember that the film had a run at the Paris that went on and on and on …

The original facade of the Paris theatre, when it was the APP from its 1916 opening, was designed by famous American architect Walter Burley Griffin who also planned Australia’s capital – Canberra.

Another Theatre demolished, I think, under the sensitive hand of property developer Leon Fink. Who can forget what he did to The Regent in George St.