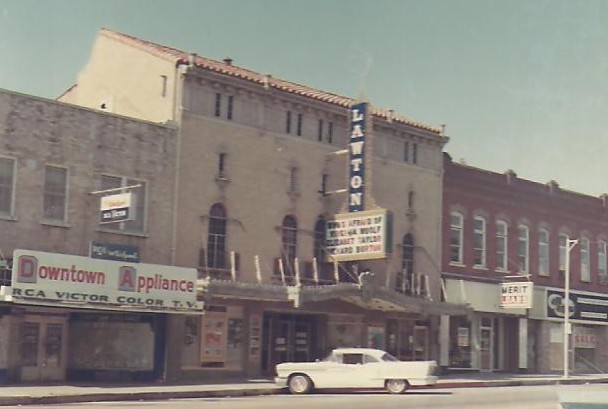 The 1,100-seat Lawton Theatre was opened on August 29, 1929 when it was equipped with a Western Electric sound system. The opening movie was Arthur Lake & Betty Compson in “On with the Show!”, the first all talking/singing, all color movie. It was closed in 1976.

Close inspection of this vintage postcard air view of business district, downtown Lawton, will reveal several theatre structures, including the Lawton Theatre,
View link
and this color postcard of Fort Sill Theatre, still showing free movies to those in uniform who serve our country,
View link

This 1965 photo clearly illustrates the Italian flair of the Lawton Theatre. To view photo type in word “theatre”, then search …
View link

A 1960s picture of the Lawton Theatre can be viewed on these pages
http://www.roadsideoklahoma.com/node/427

This is what the neighborhood looks like now, the Lawton Theatre is long gone.
View link

Screen star Joan Crawford (Lucille Fay LeSueur) resided in Lawton as a child, where her stepfather, Henry Cassin, managed the Lawton Theatre.
Following bio is courtesy of wiki;
“Crawford’s mother subsequently married Henry J. Cassin. The family lived in Lawton, Oklahoma, where Cassin ran a movie theater. Crawford was unaware that Cassin was not her birth father until her brother Hal told her. The 1910 federal census for Comanche County, Oklahoma, enumerated on April 20, showed Henry and Anna living at 910 "D” Street in Lawton. Crawford was listed as five years old, thus showing 1905 as her likely year of birth.
Crawford preferred the nickname “Billie” as a child and she loved watching vaudeville acts performed on the stage of her stepfather’s theater. The instability of her family life impacted on her education and her level of schooling never really progressed beyond the fourth grade. Her ambition was to be a dancer. However, in an attempt to escape piano lessons to run and play with friends, she leaped from the front porch of her home and cut her foot deeply on a broken milk bottle. Crawford had three operations and was unable to attend elementary school for a year and a half. She eventually fully recovered and returned to dancing …"

A photo of Joan Crawford’s childhood Lawton home can be seen on this link,
View link

Listings for this cinema stopped in 1976.

Boxoffice, Dec. 17, 1973: “Video (Theatres)’s Lawton manager Clyde Walker reports that a wave of downtown urban renewal in Lawton is about to sweep away three circuit houses there - the Diana, Rita and Lawton. The latter has been closed for more than a year.”