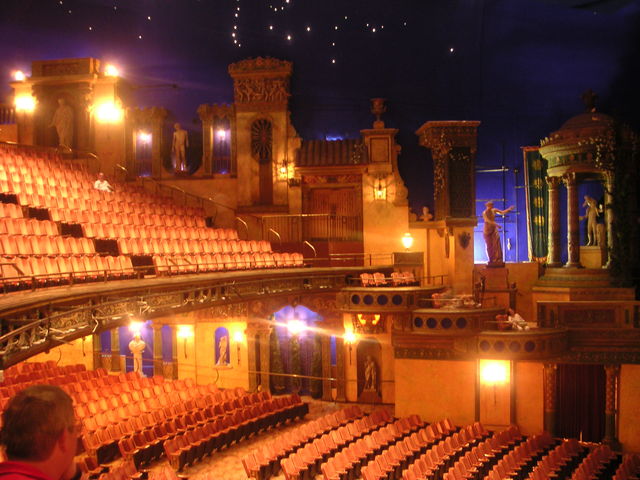 The Capitol Theatre was built on the site of the 1893 Sydney Fruit and Vegetable Market in the Haymarket area of the city centre. The site was later redeveloped for Wirth Bros. Circus, opening as the Hippodrome in 1916. The original facade of the markets has been retained, although the 36 street level arches were rebuilt up to the second level of the building.

In 1927, Union Theatres took over the lease (the property was and is still owned by the Sydney City Council) and converted it into a movie palace. Sydney architect Henry White, went to America in 1927 to get ‘know-how' on what was the latest in theatre design.

What no one knew until the 1970’s, Stuart Doyle, head of Union Theatres, employed John Eberson to design much of the Capitol Theatre, particularly its auditorium. His finished plans were sent to Henry White’s office in Australia, then released with only Henry White’s name on them. Whereas, the American drawings listed ‘Henry White, Sydney, and John Eberson, Chicago, Architects-in-Association’ as the principal architects.

When the conversion was complete, the Capitol Theatre reopened as an Atmospheric style movie palace on Easter Saturday, April 7, 1928; with the silent feature “His Lady” starring John Barrymore and Dolores Costello. Seating was provided for 2,973, in orchestra stalls and balcony. There was always a lavish stage production with orchestra, singers and dancers, before the main feature. The Wurlitzer 3Manual/15Rank theatre organ was played by the American organist, Fred Scholl, the organist from Grauman’s Chinese and Egyptian theatres in Hollywood, California.

After the close of Greater Union Theatres' lease in 1972, “Jesus Christ Superstar” played on stage for a couple of years, and then rock concerts took over the venue, with vandalism beyond belief. In 1977 the ailing building was classified by the National Trust of New South Wales. In 1989, it was decided to restore the theatre as a venue for live theatre. Restoration and extension work started in 1993.

Some $AU30 million later, the fully-restored Capitol Theatre opened on January 24, 1995. In July 1995, “Miss Saigon” became the theatre’s first big stage production. The stage had been extended into a street at the rear of the theatre and the orchestra pit enlarged to accommodate 110 players.

The stage is now one of the largest in Australia. The fly-tower is some 5 floors high. A 35mm projector was installed in 1999 for nostalgia screenings whenever the theater is closed for ‘live’ shows. “Gone With the Wind” was the first of many films in the pipeline, but because of changing theater management and policy, the screening of films has suspended. A great shame, as the theatre was originally designed for movies.

For a complete visual history of Sydney’s Capitol Theatre, a 60 minute documentary on VHS cassette “Once Upon a Dream”, is available exclusively from Kino Cinema Quarterly in NTSC and PAL format for $US20 (including overseas airmail postage) and $AU30 (including Australian postage).

Thanks Paul. Thats the same way as with the Civic Theatre up in Auckland. They are using it for more stage shows rather than movies.

They do use the Civic for film festival’s though and they have a lovely flamingo curtain. If you are interested in seeing photo’s of Auckland’s Civic Theatre the website is http://www.friendsofthecivic.4t.com I hope you enjoy the website.

I just learned about this theatre when trying to find a list of theatres in Australia. Interesting to note that Eberson had a partner by the name of Henry White when he built this one!

Henry White was an Australian architect whom Eberson assisted in designing this theater and others in Australia and New Zealand, including the Ambassador in Perth, and apparently the Civic in Auckland. Shortly before taking on his projects in the southern hemisphere, Eberson had seen his Riviera Theater open in Omaha, Nebraska, USA. He and White toured this theater, and used its design as inspiration for all their theaters in Australia and New Zealand. The Riviera was also renovated and reopened in 1995, and is now called the Rose Blumkin Performing Arts Center. I know the Rose well (perhaps too well?). Looking at photos of the Capitol, I see a definite family resemblance.

Correcting my mention of the AmbassadorS Theatre in Perth…

Oh you lucky lucky people! In the UK we dont have such a stunning example of an atmospheric theatre left in such a stunning state as the Capital is. Ive seen a few shows here and i say they were very very good shows to compete with the show that surrounds you from the second you walk in.
Congratulations and i look forward to my next visit

Hi folks
I’m astonished that I have found info on the Architect Henry White I am looking into my family history and Henry Eli White is my great Grandfather.

Hi Edwina,
I am writing an architectural biography of Henry Eli White for an Encyclopedia.
I would like to hear from you by email, so that I can add to his wonderful list of theatre designs.
Cinema Treasures has my e-mail address.
posted by Nava

We are lucky enough to have an Eberson Atmospheric in Louisville, KY. Opened as the Lowes in 1928, it was shuttered during the 70s-80s but repoened in most of it’s former glory. While this house too is now home to live productions, they do roll out a summer movie series. I was BO manager for the first two years of the series and it was a hoot. Lately they have been showing the same, kinda stale “summer blockbusters” and same-old same-old movies that are great, yes, but how about as little variety? North By Northwest? Awesome, can we have something else? Some Like It Hot? Not for four years in a row! Raiders? Fine, how about Blade Runner? Or 2001? Or Close Encounters? (Star Wars? Not as long as Luca$ is still alive). Check out the official page, with tons of cool pictures, at www.louisvillepalace.com