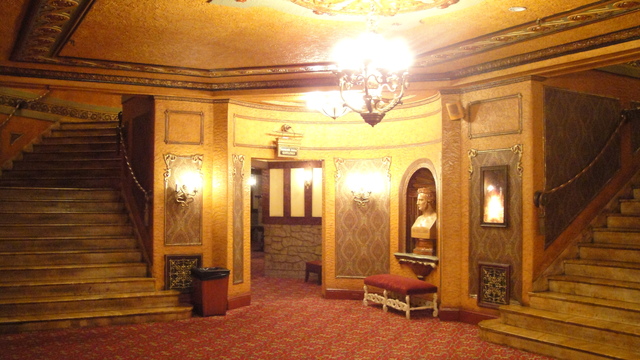 The magnificent State Theatre, located in the heart of downtown Sydney, opened on 7th June 1929 with Emil Jennings in Ernst Lubitsch’s “The Patriot”. Seating was provided for 2,775. It was then known as ‘The British Empire’s Greatest Theatre’. Paul Dunlavy was the debonir genius of the 4-manual console of the Wurlitzer organ, the largest outside of America. The State Theatre Orchestra was conducted by Will Prior.

Rising ten floors above the theatre is the Gothic-style State Theatre Office Building, headquarters of the Greater Union Theatre Circuit. Just as they did with the plans for Sydney’s Capitol Theatre in 1927, Union Theatres boss Stuart Doyle and Australian architect Henry White, returned from the USA with sketches for the new $AU800,000 theatre, and American theatre architect John Eberson was the associated architect working with Henry White.

During the 1980’s, the main auditorium was restored, although the Wurlitzer organ was left waiting for $AU350,000 in funds for some tender-loving-care. Hanging above the three-tiered auditorium are thirteen chandeliers, surmounted by a three-and-one-half ton crystal chandelier, the second largest cut-crystal chandelier in the world, which is suspended from the theatre’s golden dome.

The Gothic style entrance hall has life-size figures of King Arthur and St. George who greet those who enter. The main foyer boasts a grand sweeping marble staircase, with mirrored and tapestry draped walls.

The foyer area is often used for filming TV commercials and some feature films have used the magnificent setting. The State Theatre has been classified by the National Trust of Australia (NSW Division) for its high architectural quality and its essential heritage to the state of New South Wales.

Unfortunately, the theatre no longer operates as a full-time cinema, but they do screen the occasional film for festivals. At other times it is used for stage, concert, rock presentations, and as a convention centre. The State Theatre is a self-working venue and self-guided tours using an Acoustiguide handset are available, except Sunday and Monday, or when the theatre is being used.

In 2011, work began converting the State Theatre Office Building into a hotel. In early-2012, the Wurlitzer organ was shipped back to the USA for refurbishment and returned to the theatre in 2017.

I have attended many an event and screening at the State. I attended a couple of functions there back in the mid-80s, for what I can’t remember, but various fully catered events with waiters etc. rushing around with trays of food and drink. The building was open for the guests to explore on their lonesome or as part of a group with guide. I did both for a couple of hours. It was fascinating. My only complaint with the State is that, despite the size of the auditorium, the screen is rather small. I always prefer to sit in the cheap seats and get as close to the image as possible to compensate! Haha!

And does anyone remember the State 2, the tiny downstairs theaterette?

According to the 1980s press,it cost a Million Dollars to clean the cinema to it’s former glory and they used Amway products I would loved to have been the distributor.

If you are sitting upstars and not at the very front this is a terrible place to watch anything the stage is too small.

Three pages about the State Theatre, with photos, appeared in an article about new Australian theaters in the October 5, 1929, issue of Motion Picture News.

For a very well-executed virtual 3D tour, follow this link to the State’s official site… http://www.statetheatre.com.au/VirtualTour.aspx

Yes, you are taken back to 1929 in the place, and yes, by multiplex standards the screen and stage are less massive. More seriously, the rake of projection is so steep that viewers out of the sweet range do get distortions. If you want multiplex, go to multiplex. If you want history, go to the State. With over 2000 seats, four shows a day, this cinema used to get ten-week runs for major releases. Inside, you feel what it was like then, the Magic of the Movies. Pick up the video history from the confectionery bar.

While yes, generally we now hear of the contribution by architect White, it is clear from the 1929 publicity lodged above by Joe Vogel that the American contribution was acknowledged from the start.