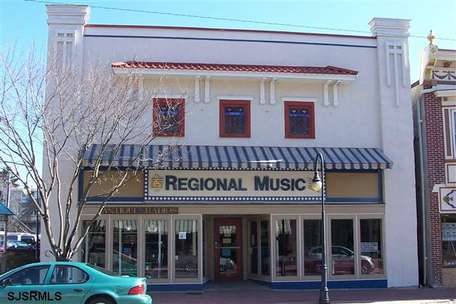 An early theater in Millville. A Moller organ, opus 3190, was installed in 1921. By 1941 the Peoples Theater was operated by Warner Bros. Circuit Management. The theater is still listed as operating in the 1951 Film Daily Yearbook.

The Peoples Theater was purchased in July 1951 from Warner Brothers by former Millville Mayor (1948-1953) Simon M. Cherivtch. He only ran it as a theater for a couple months, closed/renovated, and leased it for several years to Dorr Furniture Store. The building is still standing and now is the home to Regional Music Service.
‘Uncle Simon’ as he was affectionately known to the area’s children for his generosity, also purchased the Levoy Theater and owned/ran it for 20 years. It’s been closed since 1978 and is currently undergoing renovation.

Article here about former Peoples Theater building up for sale.