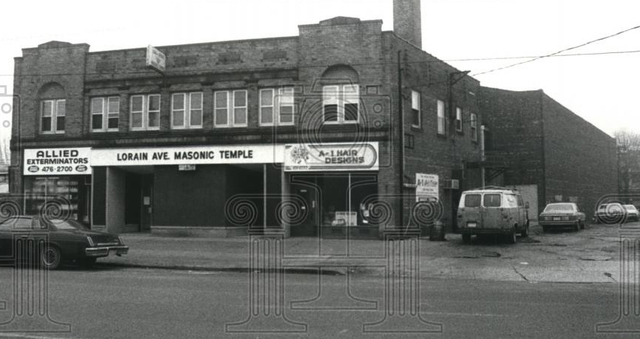 The Lyric Theater was opened February 25, 1926. It was a second or third run house located on Cleveland’s west side. It had all seats on one level. It was most noted for it’s very large marquee. The auditorium was a basic, no frills square box. The Lyric Theater was closed July 21, 1962. It was converted into a Masonic Temple.

The Lyric is still standing, and is known now as AACCESS-OHIO, an Arab-American community organization. The restored building has wood-finished doors, and a marquee that has “AACCESS-OHIO” in both English and Arabic.

A photo of The Lyric on Lorain Avenue in Cleveland is posted, along with some information on the theatre, at westparkhistory.com

Does anyone have any historical photos either interior or exterior of this treasure?

Any more information of the dates that it stopped showing/what type of theater it was? Thanks!

Grand opening was February 25, 1926, the seventh theater for operators Max Lefkowich and Abraham Polster – three downtown and this being the fourth neighborhood house. It was not to be confused with the original Lyric which was at Bolivar and 9th just across the street where the Cleveland Indians stadium was in the 21st Century. The $200,000 New Lyric had 1,200 seats at opening. The pair fulfilled a 20-year leased and moved on. The last show ran its final showing July 21, 1962 of “Thunder Road” and “The Big Country.” Had a nice run as the Masonic Temple with events to the public including crafts shows over the next three decades.

I remember going to the Saturday Matinees during WW II. Sometimes they had metal scrap drives and you could get in free with a few old crushed soup cans.