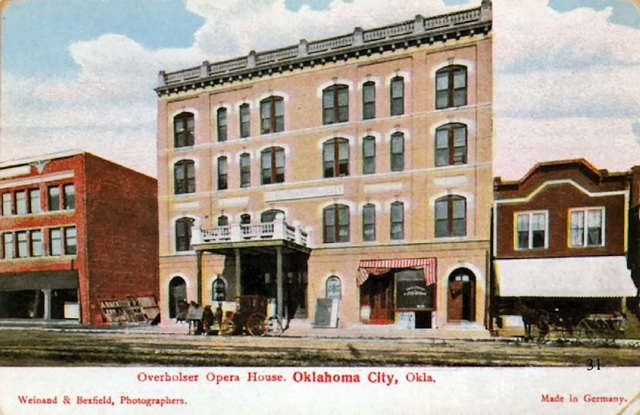 Originally opened as the Overholser Opera House it was designed by architect George H. Johnston, assisted by John Eberson. Movies were being screened in the Overholser Theatre by 1914. Alterations were carried out by architectural firm Kennerley & Steigemeyer in 1920 and it reopened as the Orpheum Theatre February 3, 1921. The seating capacity was 2,200. Later renamed the Warner Theatre it was remodeled in 1944 to the plans of architectural firm Parr & Aderhold. It later became a Cinerama theatre that featured a 60 by 24 foot screen. It was demolished in 1964.

Pic of Newsboy with Overholser Bill Board nearby added to Photo Section.

Warner Theater in 1945 was the largest seating capacity house in Oklahoma City with 1950 seats per Film Daily Yearbook.

The opening as the Orpheum took place on February 3, 1921. This is an article from the March 1, 1921, issue of The Associated First National Franchise, the house organ of First National Pictures:

“The Orpheum, seating 2200 people, has been opened to the public, and is declared by those who have seen it to be one of the finest motion picture theatres in the country. It represents an investment of $500,000, one-fifth of which is in furnishings.

“John Sinopoulo, long prominent in Oklahoma City as a showman, is one of the principal owners of the Orpheum. His brother, Pete, is manager of the house.

“‘Passion’ is one of the attractions which First National put into the Orpheum. On the opening day, February 3, seven thousand people paid admission at four shows, according to the local newspapers. One paper estimated that, judging by remarks made by patrons, many people would attend two and three times during the engagement, and that then all who wished to see the attraction would not be able to get in.”The May 8, 1920, issue of The American Contractor said that plans for the rebuilding of the Overholser Opera House in Oklahoma City had been prepared by the St. Louis firm of Kennerly & Steigemeyer. George Hancock Kennerly and Oliver William Steigemeyer were in partnership from 1913 to 1933.

Original architect was George H. Johnston. John Eberson was learning the ropes with him at the time. 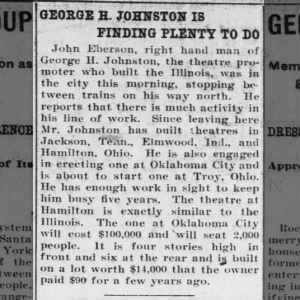