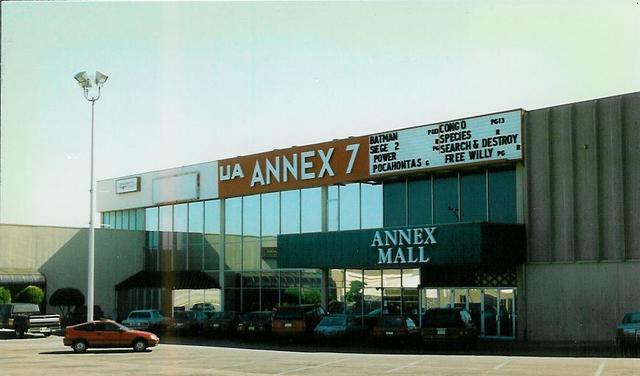 I remember the Annex 3 and 7 very well. It was located on 41st between Sheridan and Yale in what is now a very busy shopping complex. The old Annex mall has been torn down replaced by TGI Fridays and other modern conveniences.

The original Annex 3 was located in a not-so high traffic mall with a Oshman’s Sporting Goods and a few other odds and ends shops. The theaters themselves were really spacious, each containing upwards of 300 or so seats. A typical old United Artists theater setup.

When the masterful decision was made to add 4 screens to keep up with the Jones', the decline of the theater and the location was evident. The additional 4 screens were built on the complete opposite end of the original theater and mall, making it easy for anyone to just sneak in (and believe me, they did). Plus, the newer theaters were extremely cramped and unattractive. However, the theaters held on for a little while.

The end of the Annex came with the opening of the AMC Southroads 20 located directly across the street from the Annex. AMC also took out the General Cinema Southroads Mall I & II, which was located near the same mall complex.

Closed as the Annex 7 on Sunday, May 10, 1998. Owner Hollywood Theatres was instead trumpeting their Promenade Mall Palace 12 location opening five days later. The final marquees: Jackie Chan in MR. NICE GUY; DANGEROUS BEAUTY; THE BIG LEBOWSKI; AS GOOD AS IT GETS; THE APOSTLE, MY GIANT; PRIMARY COLORS.

My family and I saw a lot of movies at this theater. Of course, as a kid, the action flicks stand out more prevalently. I was an avid comic book collector at the time and had frequented Wizard’s Asylum’s Defcon comic conventions, especially the year they had Todd McFarlane as a guest. So, I was stoked when this theater hosted the premiere of “Spawn”. Being a basketball fan, as well, I was excited to see Space Jam here, too.

The movie that really stands out for me, though was Jackie Chan’s “Rumble in the Bronx”. The story behind that film, for me, was that my parents wanted to see a different movie that I had no real interest in seeing. So, when we got inside, I took off in a different direction to see something else. The movie I chose was “Rumble in the Bronx”. I mean, the title sounded cool and it just had to be better than what my parents were seeing, right? I went into that film knowing nothing about it and nothing about Jackie Chan. It was dubbed, which also threw me because it wasn’t often that I saw those types of movies. But wow, I could not believe the action sequences! I had seen a tremendous amount of action movies up to that point but I had seen nothing like what I was seeing on the screen. I wasn’t even aware that a human could do the things that Chan was doing. And to top it off, as the credits were rolling, behind-the-scenes bits were shown of Chan and his team pulling off the stunts, Chan insisting on jumping from a neighboring parking garage roof to a fire escape on the outside of an adjacent building. He subsequently broke his ankle/foot and the crew made a fabric slipper that looked like his sneaker to slide over his cast so he could continue shooting. Simply amazing and when I met back with my parents, I retold what I saw as best I could as if I had witnessed something completely unbelievable. And truly, I had. This is the experience movie theaters give us; rare, fascinating moments in time that you can share with family, friends, and complete strangers and best of all, memories.