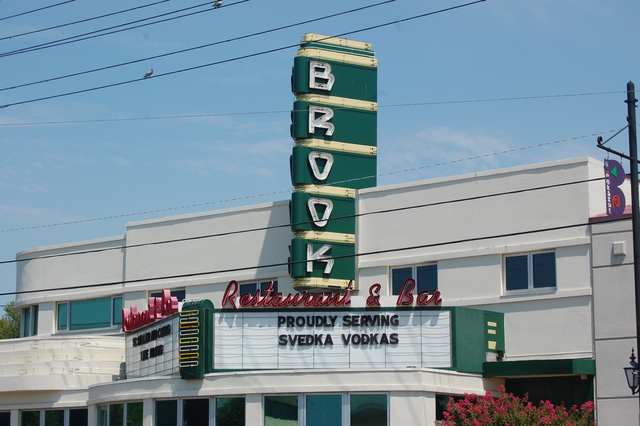 The Brook Theater, opened in late-1949 with Fred MacMurray in “Father Was a Fullback”. It is located in the Brookside District and was designed by William Henry Cameron Calderwood. It was closed on July 4, 1978. The 1990’s renovation was by Fritz Baily. The theater is now home of the Brook Restaurant and Bar.

Both the BROOK and DELMAN belonged to the powerful LOEW’S Theater Circuit.

For detailed information on Tulsa theatre architects (and others) look into this interesting site;
www.tulsaarchitecture.com/architects.htm

A 1987 photo of the Brook Theater in Tulsa here and here.

The August 2010 issue of “Signs of the Times” features a picture of the current Brook Theater with the following caption: “When the Brook opened as a theater in 1949, it featured "Father Was a Fullback,” which starred Fred MacMurray. The theater features one of Tulsa’s few marquee signs that includes channel-block, double-tube letters; channel-script, sign-tube letters; and neon bandings. The letterbox contains glass panels. The Wally Werr Sign Co. manufacturered the originla sign. The theater building now houses a restaurant.

Here is yet another web page with photos of the Brook Theatre. The accompanying text says that the Brook served as the home of the American Theatre Company (Tulsa’s leading theatre group) for fifteen years before being converted into a restaurant. ATC’s web site says the Brook became the company’s second stage in 1979, so fifteen years would be just about right if the restaurant conversion took place in the mid-1990s.