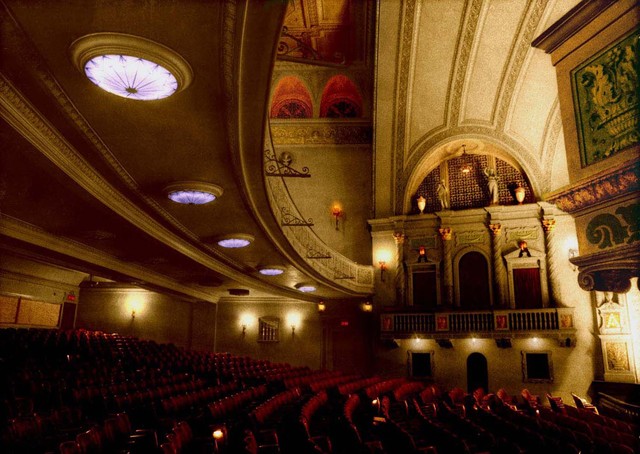 This was the second Orpheum Theater in Tulsa (the first Orpheum Theatre was located on 3rd Street and became the Rialto Theatre -it has its own page on Cinema Treasures). The 1,500-seat Orpheum Theater opened on August 17, 1924 with Richard Talmadge in “Let’s Go” on the screen and 5 acts of vaudeville on the stage. It began as a vaudeville venue and got some of the top acts in the country. Movies were also screened. It was equipped with a 2 manual Wurlitzer organ. In 1931, the theater switched to showing first-run films. It closed in March 1970 and was torn down later that year.

Miss Melba Toast:
Thanks so much for the link to the Orpheum balcony shot. I worked at the Orpheum from June, 1965 until February, 1970, shortly before I moved to Chicago. I’ve seen posts for both the Orpheum and the Ritz, listing their demolition as 1973. The Ritz THEATRE was torn down in 1960, but the RITZ BUILDING remained until around 1973. The Orpheum closed in March, 1970 and was torn down during the spring and summer of 1970. When I returned in May, 1970 for my graduation from The University of Tulsa, the stage house and about half of the auditorium were already gone. The console of the Wurlitzer organ Opus 691 mentioned in a post above by Lost Memory is sitting in my basement “speakeasy” and has just been restored to it’s original ribbon mahagony finish. I played it for the first time in 1962 just before Phil Judkins, Dorothy Smith and the late Bill Roberts (bless them all) dismantled it for a complete rebuild. According to the Wurlitzer list, it was installed as a Style D, 2m/6r as a single chamber installation in Tulsa’s Rialto Theatre in May, 1923. In July, 1924, it was moved to the Orpheum and three ranks (Salicional Celeste, Clarinet and Kinura) were added and it became a two chamber installation. These dates would seem to make sense, because I was told by one of the Orpheum’s projectionists (then an elderly man)that the “New” Orpheum opened in November, 1924 but had been under construction since the late teens. I hope someone can confirm these dates. It’s a shame so much of this history has been lost!

Status of this theatre should be changed to Demolished.

Today the Orpheum kinda sorta still lives inside the (hopefully) temporarily shuttered Casa Bonita Restaurant as many ornate fixtures from both the Orpheum and Ritz were incorporated into this fantastic atmospheric eatery. As part of the amusement arcade Casa Bonita had a kiddie cinema that showed continuous cartoons. View link
and
View link

This photo is entitled “Tulsa Schools, Theatres, and Eateries of the 1930’S”,
View link

I recently found this article in the February, 1924 issue of The REEL JOURNAL, the Film Trade Paper of the Southwest. It disproves my earlier post that the Orpheum Building had been begun in the teens but stopped during World War I. (That was a story told to me by an elderly Orpheum projectionist.) This story gives a lot of valuable information about the theatre’s construction and decor.

W. M. Smith of Tulsa, Okla., has let contracts for the $760,000 new Orpheum vaudeville and motion picture theatre to be erected on West Fourth street in Tulsa. The theatre, which was designed by John Eberson of Chicago, 111., will seat 1,500 on the first floor and balcony.
The general contract for the building was let to Brickney & Garbett, Kennedy building, Tulsa, while Mandel Brothers of Chicago have been retained to decorate the new house. The structure will be five stories high, faced with terra cotta. Contracts for equipment call for Powers projection machines, a transverter, Minusa screen, for stage lighting fixtures, etc., to Witmark, Chicago. For seats to the American Seat Company. Vento heating will be used, while the Karpen Company, Tulsa, is to furnish carpets and furniture.

Cupie: The history of these theatres, their names and locations is VERY confusing. There is a wonderful “Tulsa Gal’s Blog” which sorts all of this out. According to her, the Rialto of the 1920s-70s was originally The Empress, The New Empress and Orpheum. The first Rialto was in a building next door. From 1919 to 1924, the Rialto and Orpheum were next door to each other on 3rd Street. When the new Orpheum opened on East 4th Street, the Rialto moved next door (into the original Orpheum) and remained there until it was demolished in 1973. Whew!

For her complete history, go to this link: http://www.tulsagal.net/search/label/The%20Orpheum

One thing I just realized is that the Wurlitzer pipe organ console from the Orpheum, which I now own, was originally installed in a different Rialto than the one I remember. It was originally installed in the Rialto in 1923 and moved to the “new” Orpheum and enlarged (by the Wurlitzer company) after the Orpheum moved to 4th Street. A theatre program from 1918 boasts a $14,000 pipe organ in the original Rialto. Now I must research that to find out what that organ was. From that era (pre-1920) most theatres had glorified church organs, usually real “wheeze-boxes” – not the wonderful Wurlitzers and Robert Mortons of the 1920s. With digital sampling, the Wurlitzer console is once again making music in my basement.

A great example of what made the grand movie palaces what they were. Too bad this one had to go.Just another case of “You don’t know what you’ve got till it’s gone”. The color photo at the top of this article is a great shot. 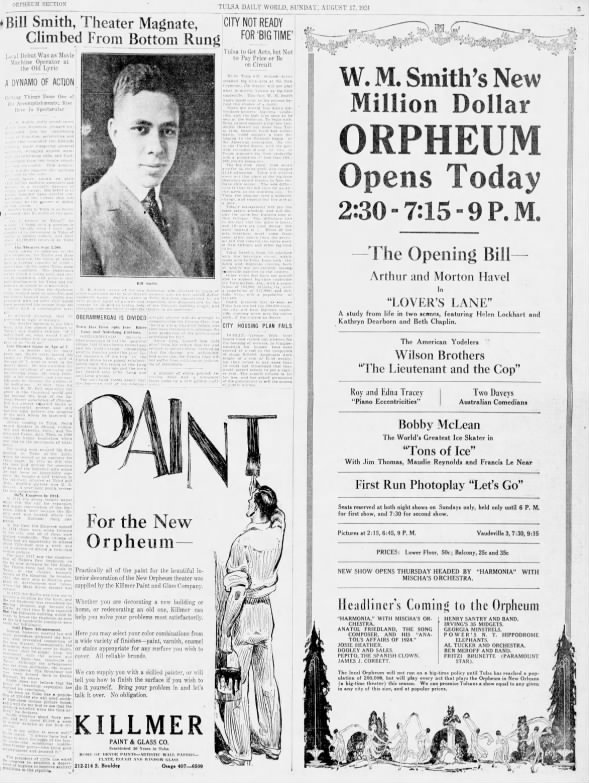