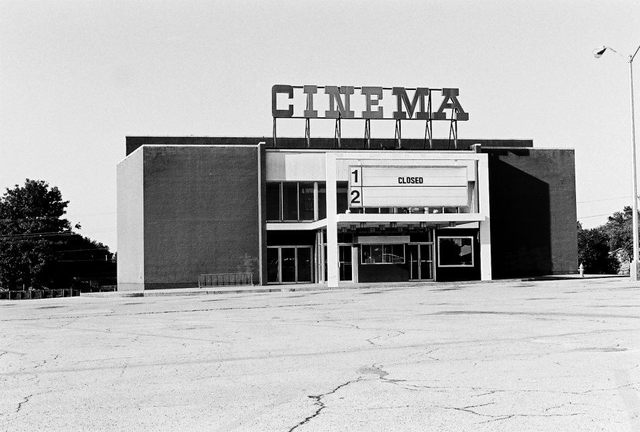 The Southroads Cinema was opened as a single screen and was later twinned. It was closed in 1993 with “Jurassic Park”.

I worked the extra board here in 1980-1983. My mentor was the late Glen Raines, probably one of the most professional operators I have ever had the pleasure to work with. The booth was nearly spotless with Century heads and Ashcraft Super Cinex water-cooled lamphouses. Up until the theater was twinned and prior to its eventual demolition, it ran with an enjoyable “changeover” booth that preceded the challengeless era of platters and “cold” xenon light sources.

The last picture that ever showed there, was Spielberg’s “Jurassic Park” in it’s initial 1993 run. Saw the film there as it was screened on both screens. The closing and subsequent demolition were imminent, and the lobby was pretty bare, save for a Jurassic Park arcade game and a few merchandisings. It was a pretty haunting atmosphere. I have an old newspaper photo showing one of the “Star Wars” films where the line wraps around the theatre. I will try to post it This theater needs some old coverage.

This theater was never the same after it was twinned. That massive single screen and sound system was something to behold. Watching Harry Dean Stanton go looking for that cat in Alien was an experience I won’t forget as a child.