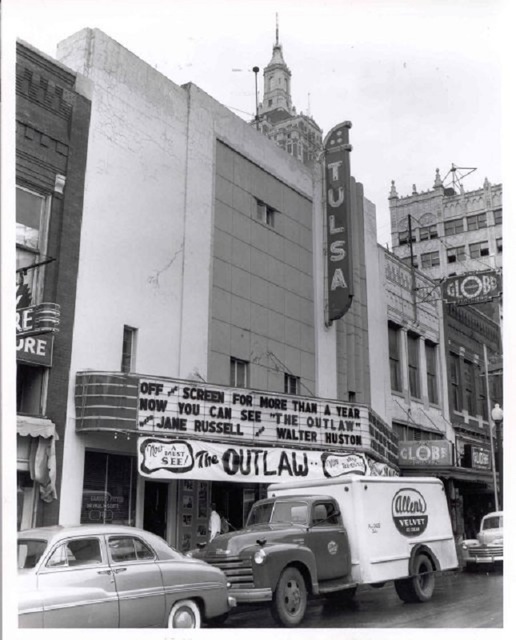 This 1929 photo from the Tulsa Library shows the Gayety Theater, according to the caption. I can’t see it in the picture:
http://tinyurl.com/2ekcpj

The Palace marquee on the left side of this 1943 photo suggests another downtown theater in Tulsa:
http://tinyurl.com/22tpke

Sorry, the Palace is already listed. My mistake, so disregard the previous post.

Regular updates on the Tulsa Lawyer web site causes their photos to constantly change pages. From the Tulsa Lawyer link comes this direct route to a 1950 color postcard of the Tulsa Theatre…
http://tulsalawyer.com/img85.gif

Seems that Oklahoma Historical Society is not too interested in documenting fact, as they remark that the Tulsa Theatre replaced the Main Street Cinema. Vintage images from other sources prove that these two theatres operated in compitition across the street from one another.
The eye pleasing interior motif of the Tulsa Theatre could best be described as Southwestern Moderne.

When Tulsa Theatre switched over to screening skin flicks during the 1960’s these were the type film shown. Tame by todays standards, but quite recy back then.
View link

The first-quarter theater construction survey in Boxoffice of April 26, 1941, reported that the Griffith circuit had opened its new Tulsa Theatre in Tulsa.

Regarding cosmic ray’s comment of September 1, 2007, I think the Oklahoma Historical Society’s statements about these theaters come from notes accompanying the Griffith circuit’s collection of photos. The claim that the Main Street Theatre was “replaced” by the Tulsa Theatre probably only means that the Tulsa supplanted the Main Street in the circuit’s hierarchy of theaters in the city. The OHS can be faulted for not providing context for the statement, but there might not be much written information to work with in the photo collection.

I haven’t found a source to confirm this, but after seeing the Griffith collection photos of the Tulsa Theatre, and considering the fact that it was a Griffith house from 1941, I’d lay odds that this theater was designed by Jack Corgan and William J. Moore. It has the characteristic look of their work. Plus, Moore was R.E. Griffith’s nephew, and it’s known that Corgan & Moore designed other Griffith houses during this period. I would be surprised if the Tulsa turned out not to be one of their works.

I’m sure you’re correct on these issues, Joe. Cosmo was right when he wrote that the Main Street Cinema was actually across the street from the Tulsa Theatre.
Urban legend tells that the destruction of the Tulsa Theatre was the inspiration for this song. Just as Joni Mitchell’s “They Tore Down Paradise” was inspired by the demolition of the Chicago Paradise Theatre.
http://www.youtube.com/watch?v=mUy3kYCi4xU