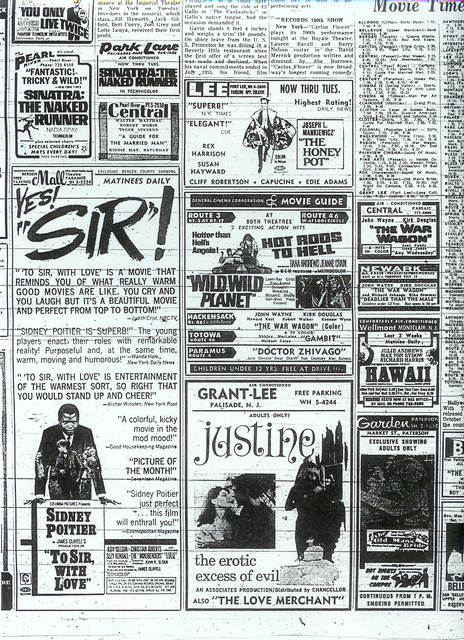 This theatre was located in the Bergen Mall in Paramus NJ, one of the oldest malls in the United States. It opened on July 13, 1960 with Peter Sellers in “The Mouse That Roared”. The theatre showed art films and foreign films, often in exclusive Bergen County engagements. It was twinned on March 8, 1978

Nearly 35 years ago the John Carpenter remake of the Thing played here while Cinema 35 had E.T. and Stanley Warner had Blade Runner and Tron and Century had Rocky III.

I remember seeing “The Natural” starring Robert Redford at this theater in the summer of 1984 (I believe that was the second – or third – film released by the then-fledgling TriStar Pictures, now a division of Sony).

If I remember correctly, this auditorium had what I thought was a precursor of stadium-style seating. Very unique.

Too bad there wasn’t anything else playing here I liked until I left Jersey in June 1986; I was almost about to see “The Purple Rose of Cairo” in the spring of 1985 when it played at the Mall, but I wasn’t able to because of time and money. I was then completing my junior year of college at Fairleigh Dickinson University in Teaneck right down Route 4; I returned to the area in September 1985 and the first movie I saw upon returning was an encore of “Back to the Future” at Cinema 35, itself down the street from the Mall but going west (see my comment about that at the listing for Cinema 35).

Sad both of these theaters are now history.

I forgot – Cinema 35 is listed here on Cinema Treasures as “Paramus Picture Show.”

Yup. This theater sometimes had a mix of commercial and indie movies during its long run.

When was dolby stereo installed ? I saw an ad for the thing that had this theater showing it in 35mm dolby stereo.

And by that I meant the 1982 John carpenter remake .

And nobody is answering you because here knows! Maybe it was installed the same year the arcade was.

Two screens opening on March 8th, 1978. No ad found in the Newark newspaper. When this theater opened it was the first in Paramus to show art house fare and the first ever indoor movie theater in Paramus, NJ.