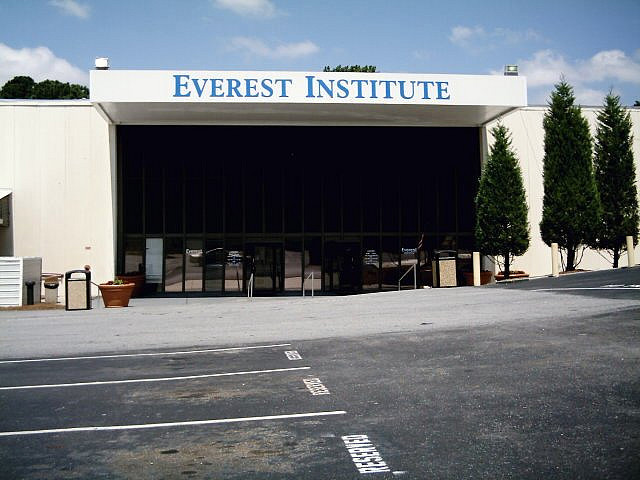 While the Plitt Southlake Theatre was the classiest cinema on the south side, the Arrowhead Cinema Centre was the area’s state of the art big screen complex. Opened by the Weis Theatres circuit on December 18, 1974 with Al Pacino in “The Godfather Part II”, the Arrowhead Theatre’s design was a dynamic mix of concrete, aluminum and steel.

The Arrowhead Theatre had 3 large square auditoriums, all equipped with giant screens and incredible sound. The lobby was situated in the front centre of the auditoriums and featured a really neat circular concession stand. Andy Warhol would have loved it! The Arrowhead Theatre was one of the elite four metro Atlanta theatres to present the first run of “Star Wars” in 1977.

This was a great Theather. I went there as a small child during the 70s till it closed in ‘89. I saw many of movies there… Star Wars, King Kong 76, The Deep, Inframan, Enter the Ninja etc. The theather became a dollar theather in '84. The last move I saw there was Hellraiser 2. After it closed, it became Comcast Cable. Now it is a medical center. I sure do miss it.

This was another theater of my youth. In the early 70’s you could see any first run movie here (These include Jaws, Star Wars, Close Encounters of the Third Kind.)

I remember going to see matinees here after working all night. When AMC took over, they made the lobby look better. I guess now it could survive as an art house. Unfortunately it is probably gutted out and is now a trade school.

I hate to see all the old things go.

I lived at this theatre in my youth and through High School when it was a dollar house. It was a great date theatre as a couple of the houses had little coves to the left and behind the entrance doors to the theatre where you could sit, watch the movie and have a little privacy. Unfortunately the area started going down and all the newer theatres finally shut it down.

As a northsider, I never attended this theatre and only drove past it once. I believe it opened Christmas 1974 with its prime feature being Godfather Part 2.

Starting in 1971 Weis went on a big expansion in Atlanta converting the old Peachtree Art into the Weis Cinema, opening and then twinning the Broadview, buying the Peachtree Battle Mini Cinema and then in the summer of ‘74 the rest of the mini cinema chain, finishing and opening the Franklin triple, and then building this one. I never worked for Weis so I can not say for sure, but I think that Arrowhead and Broadview were the only ones that were Weis built. All of the others were pick ups of existing theatres and since the Broadview was a conversion in an existing shopping center that would make this one the only one built new from the the ground up.

Weis used the same decorator in all of their Atlanta locations and this resulted in a lot of curves, bends, odd colors and strange lighting in the lobby areas as described above. I personally did not care for the style, but it certainly attracted attention. Mike Rogers has described the Weis Cinema in Augusta as having some sort of lighted tunnel that you walked through.

Weis was a believer in putting up big advances to outbid the competition for the best movies, and in the first half of the 70’s this worked well for him, especially in the Buckhead theatres, Capri and Fine Art. Love Story, Ryans Daughter, Poseidon Adventure, Godfather, American Graffiti, Last Picture Show, just to name a few. When the exclusive run practice started to ease up and outlying areas started to get the big bookings Weis started building places like this. He hit it especially big with Star Wars when he opened it here, Franklin Road, and Doraville on opening day. Loew’s Tara was the only non Weis booking for Star Wars.

In the late 70’s some bad booking choices combined with the arrival and / or expansion of national chains AMC and GCC caused Weis to sell off most of his properties outside of his hometown of Savannah. Some locations went to AMC, Lefont, and Drafthouses and others closed up. This one hung on for a while but the birth of the multi-plex and mega-plex meant the end for anything less thatn 12 screens.

This opened on December 18th, 1974. Grand opening ad in photo section and below 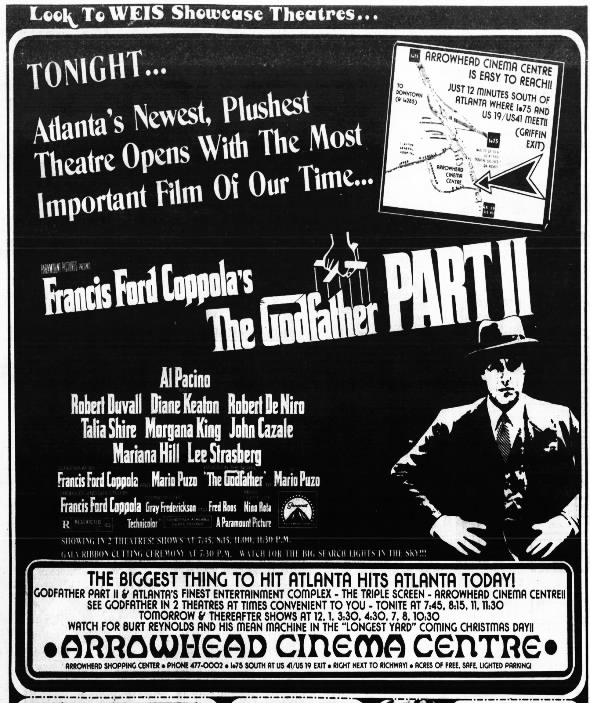 Surprisingly, AMC operated this theatre after Weis and likely did so until it closed in the mid/late 80’s.

AMC also picked up the Franklin 3, if I recall correctly at one point all AMC had in Atlanta was the Omni 6, Arrowhead 3 and Franklin 3.