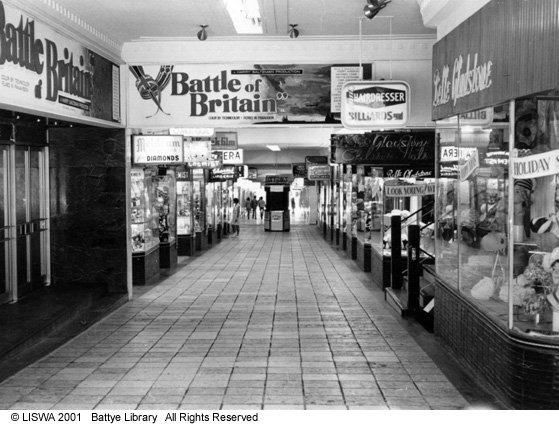 Hoyts' Plaza Theatre was opened on Perth’s Hay Street on 16th September 1937 and had a seating capacity of 1,314. Built on the site of the former Majestic Picture Theatre, the theatre was part of a new arcade development linking Hay and Murray Streets. The arcade remains one of Perth’s busiest, while the theatre has been closed and put to other uses in recent decades.

Designed by architect William G. Bennett in association with Melbourne’s H. Vivian Taylor of architectural firm Taylor, Soilleux & Overend, the facade of the theatre/arcade is narrow but dramatic, presenting a stylised skyscraper effect in classic art deco fashion. It opened a year in advance of the rival development of the Piccadilly Theatre (still operating) and Arcade, located 60 metres further to the west on Hay Street.

The Plaza Theatre underwent an extensive upgrade in 1965, re-opening with “The Sound of Music”. With increased capacity, a new screen and plusher appointments, the Plaza Theatre became Hoyts' premier theatre in Western Australia, home to the blockbusters. In August 1965 Hoyts chose (for reasons unknown) to re-name the theatre the Paris Cinema. Soon after, Hoyts relinguished their lease to the Ace Theatre group. With the advent of the multi-screen central city and suburban complexes, the Paris Cinema was shut down in 1984, briefly becoming a youth disco which closed in 1987.

My first experience of the Plaza Theatre was in the late-1950’s when, as a very young child, I saw Michael Todd’s “Around the World in 80 Days”. My one memory of the film is of Shirley MacLaine about to be burnt alive on the funeral pyre. It still gives me nightmares!

I remember seeing SOUTH PACIFIC at the Plaza. The cinema installed a new curtain in white with big pink flowers on it and sprayed floral perfume in the auditorium during the movie. Such was the charm of the cinema in those days. SOUTH PACIFIC was also filmed in TODD-AO like AROUND THE WORLD IN 80 DAYS. The Plaza installed the special sized screen for those movies. The cinema had an elegant atmosphere. Pity the cinema is not open today. They could re-open and show a lot of the old movies of the 50s and 60s on the big screen. Time to re-live the past, eh!!? Alexinperth

does anyone have any pictures of this theatre? I walk past this building, and through the arcade below it quite often wondering whats inside…

Here is more information on the Plaza with a photo, was built on the site of the old Majestic Theatre:
View link

Here’s an incredible series of 3D photos of the auditorium. As you can see it was painted black from when it was a disco, and the chairs were removed. But it’s still there waiting.

It’s heartening that the PLAZA/PARIS still exists, modified and mothballed but not destroyed. Is there someone out there who could bring this fine art deco environment back to life? If you look at the images posted by damient86, you’ll see the fine deco ceiling and streamlined wall motifs. This remains a mini-treasure awaiting re-discovery.

The Plaza Theatre was opened on 16/9/37 with “Coronation in techicolour”,“March of time”, “Walt Disney colour cartoon(The Country Cousins)”,“Lastest Australian and Overseas Fox News”,and “Lloyds of London”. The theatre closed on 17/8/1965,and reopened on 19/8/1965 as the Paris Theatre. The Paris Theatre closed in 1984,and turned a disco. The entrance and exits were converted into shops in Plaza Arcade. The auditorium is still there,access through the rear entrance in the laneway.

When in at the Museum of Performing Arts at His Majesty’s Theatre a couple of weeks back, archivist Ivan King showed me the interior shots he has of the Plaza. They are wonderful – and thank heavens high resolution images still exist. They haven’t been scanned unfortunately but I’m hoping I can get Ivan to scan them for me so I can upload here.

The Plaza Theatre closed on 17/8/1965 to renamed as the Paris Cinema(reopening date unknown?). Classified by the National Trust on 3/12/1990. State Heritage register 3613, but not registered.

The disco was called Teenage Angels Disco and then callec Spiders Dance Club and closed in November 1987.

If you copy this link and paste it in your browser you’ll find a slide-show of the Plaza as it is now: boarded-up and decaying. The images are by Gregory Bruyer. http://pepperpoppins.com/plaza/