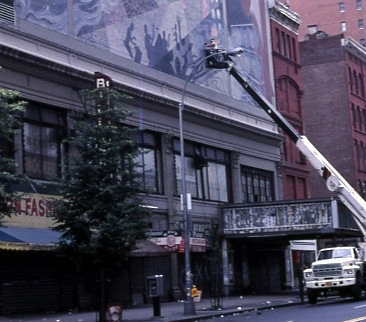 The Academy of Music was built by movie mogul William Fox and opened in 1926. The theater was created to fill the gap left by the demolition of its original counterpart across 14th Street at Irving Place. It was one of the major movie theatres in the Union Square entertainment district.

Until the late-1970’s there was still a (barely discernable) large size painting of a ticket that advertised “two features, cartoon and newsreel” for 5 cents.

With the demise of the legendary Fillmore East in 1971, the Academy of Music found new life as the premier mid-range venue for rock and roll music. During the 1970’s it was far removed from the center of the Manhattan movie district, and had an amazing dual life - - - concert hall by night, and home to cheesy kung-fu movies by day. Three or four evenings a week, the cream of 1970’s rock bands came through, three bands a night, shows at 8 & 11:30 PM.

By the late-1970’s it had become a full-time concert venue, eventually re-christened “The Palladium.” In May 1985 the interior was remodeled to become a multi-story disco club of the same name. It was great to be on the upper levels and get to touch the decorations and cornices that had been so high above me, the same ones I had stared at as a child.

Alas, these stories never have happy endings. As with the NYC landmark Luchow’s restaurant (right next door,) New York University swallowed up the property, as they have so often, and demolished all of the buildings in 1997 to construct dormitories for the children of rich folk. Oh well, time marches on.

Re Warren Harris' 2/11/08 post about Judas Priest vs the Theater Historical Society Conclave: I was there and can vouch for the story. My recollection is that when we didn’t leave at JP’s first demand, they actually turned up the volume. (I’m not sure how—it was already at “11”.)

I haven’t really been following what’s been going on in Manhattan since I left in the mid 80s—the assault on the few remaining Thomas Lamb houses is disheartening. Is it possible that the only intact Lamb theaters in Manhattan are the Mark Hellinger and the 175th Street?

A interesting video record of the interior of the Academic of Music midway through its days as the Palladium nightclub, 1985 to 1999. The light wall added by architect Isozaki can be seen at 01:28: Palladium1

Some other shots of the interior of The Palladium nightclub (00:18 to 01:25) during this Andy Warhol interview with Nick Rhodes. Palladium2

DaveM, The Cort Theater which is a Broadway House is a Lamb theater as is the Loew’s Canal, the RKO Hamilton, The Regent and the Victoria. The Cort is in great shape. The Hamilton is not quite a wreck but is in not great shape but there does not appear to be too much water damage, However, I photographed it in 2006 and it was photographed recently and there has been some more vandalism, graffiti mostly. The Regent is a church and is in decent shape. The Victoria is on it’s way to be landmarked hopefully as is the old Loew’s Canal. These theaters are intact and salvageable. You are right though, it is very disheartening.

Movieplace—thanks for the memory jog—I’ve actually been to the Regent and Victoria, I believe at that great 1980 THS conclave. We may have even been to the Hamilton.

I have been trying to get into the Victoria for years.

Sorry to all to off topic, but the Victoria was only fairly recently closed at the time of the 1980 THS conclave, and Loew’s shuttered it without pulling any equipment or powering down. I vividly recall everyone being startled—someone had gone up to the booth and threaded up the trailer for “The Exorcist” and ran it! We also were at the now demolished Harlem Opera house—the booth was full of deteriorating nitrate trailers.

I too am sorry to be off topic. I wish I got into the Harlem Opera House. What a loss. It was a bowling alley at the end. Did you get any pictures?

No, sorry, I took no pictures. Plenty of photographers were with that group—it would be great if some pictures turned up.

I was under the impression that this Academy of Music’s neighbor Luchow’s wasn’t in the strict sense of the word “demolished” but was felled by as I put it a “business fire”.

Squatters started a fire at Luchow’s that destroyed the interior in 1992. It took two or three years before the building itself was demolished. I doubt many tears were shed at NYU. I have the bad habit of going off topic on this thread! I have fond memories of the Academy of Music, including a trip to the Palladium, which was an ingenious re-use, in the summer of 1985.