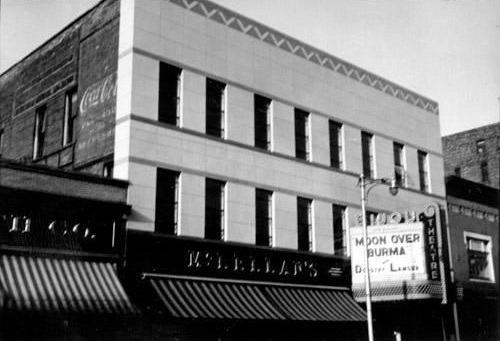 The Bijou Theater opened in 1909. It replaced the former Hamblin Opera House, operated by Walter S. Butterfield as the Bijou Theater since 1905 at 17 Michigan Avenue West.

This theater was remodeled around 1940. The Bijou Theater was demolished in August of 1984.

Photos of the Bijou and Hamblin Opera house at this link:

A Barton organ was installed in this theater in 1921.

This theatre ties in with a listing I have of a new theatre being built for W S Butterfield in 1909 by John Eberson.

I worked for Butterfield theaters cir. 1960. I managed the Michigan a block or two away. The manager at the BIJOU was a retired school teacher, I have forgotten his name. He was lazy. I had to take his concession inventory every week in addition to mine. The Michigan wasn’t in as good condition as the Bijou, but, I enjoyed working there and created a lot of exploitation. We played the HORRORS OF THE BLACK MUSEUM and I had an artist paint the front doors to look like a graveyard. We used to party and played flashlight tag after hours. Really nice group of workers. When we played GIGI, the Bijou manager came up and saw a line waiting to buy tickets. He yelled at them, that they should have seen the movie at his theater when it played first run. He was a real jerk. Across the street from the Michigan was a wonderful old theater that looked like a Opera house. Too bad someone with an imagination didn’t keep it open. I missed Battle Creek when I was transferred back to Flint.

Robert Smock replaced me at the Michigan. He later married a concession girl who was living in Lansing, the last I heard. Bob was also a manager at the Regent theater in Flint for Butterfield theaters. He managed a theater in California then moved back to Lansing where he died.