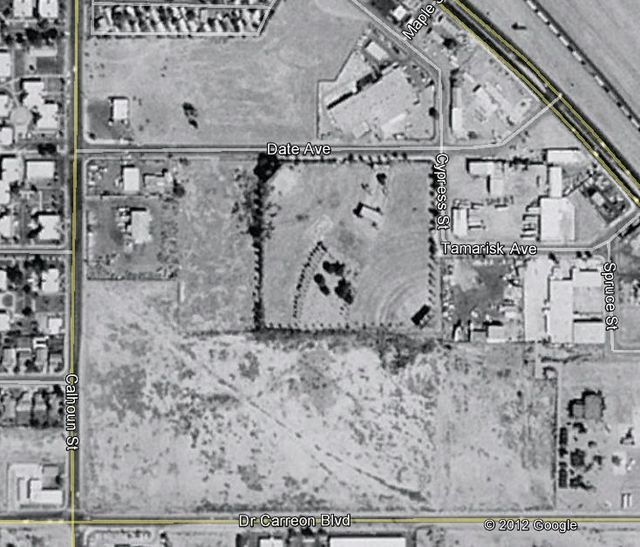 The Coachello Valley Drive-In was opened April 12, 1952. By 1955 it was operated by F and E Theatre Co. and Affiliated Theatres. By 1957 it had been renamed Indio Drive-In and was one of many theaters owned by Robert L. Lippert Theatres Inc. It had a capacity for around 600 cars. It was later twinned. The address above is the “modern” location where this drive-in was located. I couldn’t find much information on it, so I hope that other members here can help to fill in the blanks.

There was also a drive-in in the Palm Springs area, which is now gone. The pictures are from the same website:

Living in Indio in the 70s, we spent many nights at the Drive-In. During warm weather, sitting in Lawn Chairs and Drinking Beer there and at the one in Palm Springs.

What was the name of the Drive-In Theater in Cathedral City on Hwy 111 which was the best in the area during the 70s ?

Answering my own question, it was the Sun-Aire.

Uploaded Goggle Earth 1996. All the links are broken.

Approx. address for this drive-in was 83-791 Date Avenue.

Now Martha’s Kitchen and Village. This property was put to good use after the drive-in closed.

Hey jwmovies i am curently a employee here at what is now Marthas Village& Kitchen. Ive have not only heard alot of stories of deaths here but i have experienced alot of paranormal activities in the last few months. Is there any old news or activities that happened on this property.

Another name to add between Coachella and Indio Twin comes from Boxoffice, June 1984: “Sterling Recreation Organization has announced that the recently acquired Indio Twin Drive-In theatre began operation on March 23. The drive-in theatre, located in Indio, was formerly the Kay Donna Drive-In and has been totally refurbished by SRO.”

Boxoffice wrote on Jan. 14, 1950 that a construction permit “for erection of a drive-in on Route 111 four miles west of here has been issued by the county planning commission to R. C. and Anita H. Jones, and construction has been started.” Two months later, Boxoffice reported that Frank Millan had been “appointed manager of the new Indio Drive-In, operated by Reg Jones and associates”. I’ve been unable to find any trace of a drive-in on Route 111 west of Indio.

As noted above, Boxoffice said that the Coachella Drive-In opened (for the season?) in April 1952. The LA Times reported on Dec. 30, 1952 that Desert Valley Theaters and F. & E. Theaters had bought the “Coachella Valley Drive-in Theater” in Indio. The 1955-56 Theatre Catalog included the “Coachello (sic) Valley”, owner by F and E Th. Co.

On Oct. 13, 1956, Boxoffice wrote, “Charles Maestri, film buyer, and Dan Pavich, booker, both of Lippert Theatres in San Francisco … conferred with E. Van Grotel, manager of the Indio Drive-In”. But the Motion Picture Almanac continued to label Indio’s drive-in as the Coachella into the late 1960s.

In March 1976, manager E. Van Gortel announced that the Indio would be twinned, with viewing fields holding 450 and 375 cars.

In June 1981, the Indio drive-in included in movie round-up ads was the “Kay Donna Drive-In”. In November 1982, the Carlsbad-based College Theatre Corp. announced that it had closed the Kay-Donna, effective Nov. 3. The drive-in was part of a bankruptcy sale the next year.

As noted above, Sterling Recreation Organization purchased and renamed the drive-in; the Indio Twin’s grand opening ad came in the March 24, 1984 issue of the Desert Sun. And two more glimpses from that newspaper:

Desert Sun, Sept. 22, 1987: “A proposed change in ownership in the Indio Drive-In Theater will come before the Planning Commission … Columbia Theater Co. of Bellevue, Wash., wants to transfer ownership to Sang Suk You, Kun Nyo You and Kyung Choon Lee of Los Angeles.”

Desert Sun, Feb. 19, 1990: “Fire Sunday (18) caused nearly $220,000 damage to an abandoned building at the Indio Drive-In Theater at 83-791 Date Ave., officials said. The two-story building was engulfed in flames when firefighters arrived in response to a 11:55 a.m. call … The cause of the fire has been labeled suspicious … Homeless people frequently used the building as shelter … The theater is not in use.” Maybe this was the source of Calderon_123’s paranormal tinglings?

There were very few references to the Coachella / Coachella Valley Drive-In, mostly from annual lists. Did Reg Jones give up on the western site and open the Indio where it existed into the 1980s? Was it renamed the Coachella, or was the original Indio stillborn? If anyone ever gets access to old Indio newspapers, I’d bet they’d find the answers to those questions.