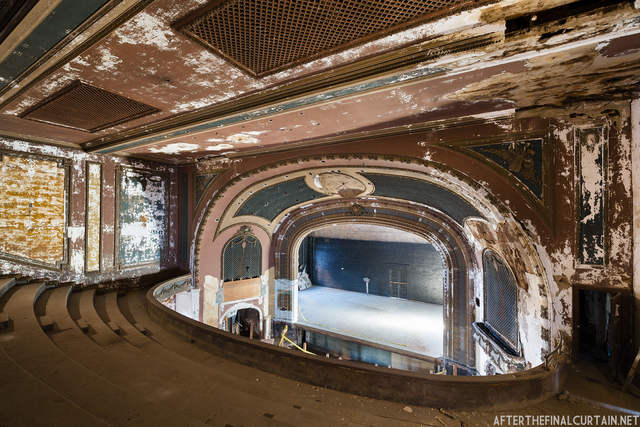 The Pantheon Theatre opened in May 15, 1921 and was designed by local architect John Bayard. Red Skelton who was born in Vincennes, Indiana performed here as a young comic and at one point he tried unsuccessfully to purchase this theatre. In December of 1939, Duke Ellington performed here and others to perform on its stage include The Marx Brothers, W.C. Fields and Spike Jones. The advertisements read “Continuous show today with a movie”. By 1944 it was operated by Alliance Theater Corp., who were still the operators in 1950. The Pantheon Theatre closed in 1961 and was converted into retail space. There are retail stores listed for this address today.

In May 2006, plans were announced to restore and eventually reopen the theatre. In December 2014 it was purchased by the Vincennes Business & Arts Initiative and the roof was replaced along with other repairs. In March 2016 they announced the building would become a shared workspace for local business’s, with training and conference facilities.

May 16th was the 85th anniversary of the Pantheon Theatre in Vincennes, IN. The new owner, Travis Tarrants, held an press conference telling the public his plans to restore the theatre.

Go to http://www.pantheontheatre.com/ for photos and contact info. They are always looking of more photos, memories and history.

An historic southern Indiana vaudeville house gets a new lease on life.

The Pantheon Theater was once a regular stop for the likes of Duke Ellington, the Marx Brothers and W.C. Fields.

It closed in the 1960’s and was turned into retail shops, but the old theater is getting ready to play host to audiences once again.

When the Pantheon opened in 1921 it was the place for shows of all kinds, and crowds filled it for years to see some of the great acts of the day.

“I remember watching an evening performance,” said Bob Bartlow, “and in between a double feature, the curtains opened and there was a performance by County Basie’s band.”

When the theater closed it was filled with hundreds of tons of sand and concrete.

The place fell into disrepair although touches of its grandeur and magic remained.

Travis Tarrants says re-opening the Pantheon is a big project.

“There’s a lot of work to be done here,” he said, “but we’ve got less and less work to do everyday.”

No one can say if a renovated Pantheon will be able to recreate the magic of the old place.

Magic that got a little red headed kid on the stage where he fell in love with the audience.

It was on the same stage that Tarrants got the inspiration to restore the theater.

“You could see just enough to realize this is a great place,” he said, “and I stood on the stage and said this place has to be saved.”

Now, for the first time in 40 years there is popcorn in the lobby, a crowd in the building, and excitement about the future of the theater.

“It’s huge,” said Lacey Rains with the Knox County Convention and Visitors Bureau, “We can’t ask for anything better than this project.”

A project to restore history, and vitality in downtown Vincennes.

Pantheon Theater organizers say it could take two years and as much as $2-million to get the theater back in operation.

According to this,in 1944 the Pantheon (and others) were run by the Alliance Theatre Corporation.

Doesn’t look like this will be restored anytime soon.

Historic theater could remain in limbo for years

I recently photographed the Pantheon. Check out the photos and a short history at After the Final Curtain