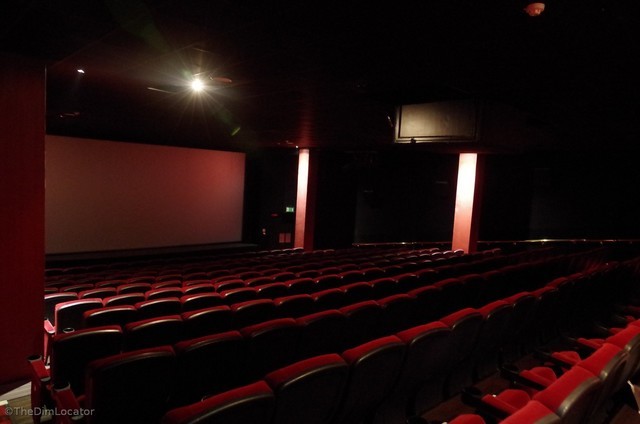 The Ritz Cinema opened on 25th November 1937 with William Powell & Myrna Loy in “Double Wedding”. With a seating capacity of 430, it was designed in an Art Deco style by architect George Coles for exhibitors Clavering and Rose as an intended large newsreel theatre. However as it is located next door, to the left side of the Empire Cinema, then owned and operated by MGM (Loew’s Inc.), they decided it would make an excellent move-over house for their productions (the opening film had played for two weeks at the Empire).

Although not really suited to sit through feature length movies, due to poor sightlines and an oppressively low ceiling (the cinema was in a basement under an office building), it became popular due to its locality. “Gone With The Wind” moved over to the Ritz Cinema from the Empire Cinema and ran for four years during the war.

It was closed in April 1970 for modernisation to the plans of architects Sidney Kaye, Eric Firmin and Partners. It reopened on 21st May 1970. The seating capacity had been reduced to 393. On 9th November 1972 the Ritz Cinema was re-named Empire 2 opening with Raquel Welsh in “Kansas City Bomber”. In 1973 it reverted back to the Ritz Cinema name. In 1978 improvements and modernisations were made to the cinema, reducing the seating capacity to 350 and it became Empire 2 again. The entrance and small foyer was converted into a Ben & Jerry’s ice cream shop and the Ritz Cinema’s canopy and signage were removed. It also resulted in the loss of most of the decoration in the auditorium, which is now bland. Patrons now had to purchase tickets from and gain entry to the cinema via the main Empire Cinema foyer, making the former Ritz Cinema, a screen within the Empire complex, with a seating capacity for Empire Screen 2 being 304.

In July 2016 five Empire cinemas were purchased by the Cineworld chain. Including the Empire Leicester Square, the other four are at Basildon, Hemel Hempstead, Poole and Bromley.

In August 2017 the Empire Cinema - at the Empire Theatre - Screen 2 was closed for conversion into a 4DX screen to the plans of architectural firm Chapman Taylor. It reopened in March 2018 as Cineworld Cinema -Leicester Square 4DX with a reduced seating capacity of 136.

A selection of photos taken yesterday relevant to the 4DX have now been uploaded, mostly of the access from foyer level down to the auditorium entrance.

Architectual practice Chapman Taylor now have a project page for the refurbishment, which includes a photo of the 4DX auditorium.

Correction to previous post: The screen is not filled by the pre-show slides, (out of focus) photo uploaded showing the right side unmasked screen area.

Paid my first visit to this screen since the conversion today (for Jurassic World: Fallen Kingdom) and I have to say I am impressed. The screen is noticeably larger than before and has a nice curve to it. Perhaps some tweaks have been made since CF100’s visit as brightness and black levels were good. LFE seemed decent and at a couple of points caused the wind-effect fans to rattle but I agree that the screen speakers could have sounded a little brighter.

I sat in row C which due to the spacing between the seats is far back enough be able to get the entire screen into your field of vision but I think for any future visits I would probably choose row D.

From a structural point of view I noticed that the strange little foyer space under the seating has been eliminated however it’s now possible to walk behind the back row. I think as well as the auditorium floor being lowered the ceiling has also been raised as the suspended ceiling is interrupted by a pattern of what I assume are concrete beams (which sit flush with the rest of the ceiling).

Zappomatic: Interesting that you didn’t find the projection brightness to be inadequate; hopefully this has indeed been rectified as the projection seemed underspecified!

How did you find it compared to the Wandsworth 4DX, including picture/sound/4DX effects, and did you find that the 4DX effects had been programmed to work effectively with “Jurassic World: Fallen Kingdom”?

It turns out that 4DX actually have several versions* of their system with “premium” variants for additional types of “Environmental Effects” and enhanced “Motion Chair Effects” options.

(*At the time of posting this comment, in the “4DX THEATERS” section of this page, with PRIME/PRO/STANDARD/ECONOMY options and respective “Motion Chair Effects” and “Environmental Effects” capabilities listed for each.)

Regarding the structural aspects of the conversion, I’m not sure what you mean by visible beams, save for those used to suspend the 4DX gear?

I suppose I’ll now have to consider getting an “Unlimited” card as seeing a film in all available formats is an absurdly costly proposition for a cinema trip—even allowing for inflation, almost 10x times the cost of a ticket for a weekday matinee performance at Empire 1 in the 1990s!

Regarding the picture here I actually found it to be one of the brighter 3D presentations I’ve seen, and there was practically no ghosting.

I was not impressed at all with the picture and sound at Wandsworth, other than the sheer size of the screen – picture appeared washed-out with poor black levels and appalling ghosting (so much so that the couple sitting in front of me turned around during the credits and asked me if the 3D was “dodgy” for me or if it was just them), and the sound was pretty lifeless. I’ve not been back to see if this was a one-off or if it really is this poor.

Effects for Jurassic World: Fallen Kingdom seemed quite effective although there was a moment when the strobes stayed on long enough for it to feel as though the auditorium was floodlit. I was dressed for yesterday’s weather and at times ended up feeling uncomfortably cold and wet thanks to the prolonged wind and rain effects!

When I say beams I mean that the suspended ceiling is interrupted by an off-centre grid of solid sections around 75cm wide that sit flush, presumably supporting the floor above.

For Unlimited cards do bear in mind that a surcharge of £2-£6 is payable every time you see a premium format although for some reason the Superscreen in Leicester Square is included if you have a West End card. Plenty of referral codes about online that will get you your 13th month for free – mine is RAF-35LH-35FJ-42BF-17NU (moderators please delete if this is not allowed).

Zappomatic: I was surprised by your comment on the screen size as I’d previously estimated it to be about the same as the Leicester Square 4DX in width. I’ve just reestimated it from the licensing plans and it looks to be as much as 50ft. wide.

That being the case, I wonder if dual projectors are being used and poor alignment between them might explain the “ghosting” issue you identified? (Or perhaps they’re not using a suitable screen for the 3D polarisation.)

Regarding 4DX effects, I found that they were sometimes “glitchy,” and the timing wasn’t always quite right. (Could have been just bad programming or hardware bugs/limitations.) If my recollection is correct, after an intense sequence of “motion chair effects” the seats would stop moving and a few seconds they would then slowly return back to unity position, which seemed odd.

Looking at a high resolution photo of the auditorium (presumably reposted from Cineworld press materials) with some post-processing in Photoshop to pull out the low level details, so it is. Well spotted!

I think you are right that the ceiling has been raised, and—I can’t be sure but—above the suspended 4DX gear it looks like there’s an exposed concrete slab. They certainly seem to have used every last inch of space available and I can’t see that there would be much left space for HVAC ducting—it looks like there’s something boxed out above the right sidewall, just behind the suspended 4DX gear.

Many thanks for the Cineworld Unlimited code, I’ll use yours if I decide to proceed so that you also get the free month in return—it would seem to be a no-brainer if the Leicester Square Superscreen doesn’t incur an additional uplift charge. I can’t find the uplift charges for IMAX, 4DX or 3D at Leicester Square, though?

Some further information on Cineworld’s 2018 foyer/lobbies refurbishment and 4DX conversion of the former Screen 2 is available in an article on the website of AV Magazine, dated 22nd March 2019.

The relevant sections of the article are:

Foyer/lobbies: Under the heading “Making a grand entrance.” 4DX: A few paragraphs under the sub-heading: “Four types of 4DX.”

I will summarise relevant key points from the article here (with the foyer/lobbies information added to the cinema’s main page on CT.)