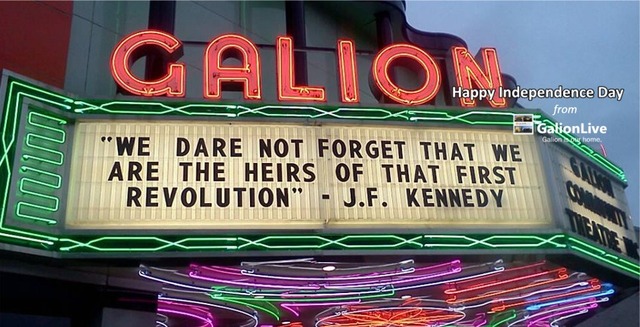 Built in 1949, this theater was sold in 1993 to The Galion Community Theater Group.

After 11 seasons and four to five productions per year, $590,223 has been put into restoring the theatre between June 1993 and to date (2004). This doesn’t include the countless hours of volunteer work.

The theatre was Galion’s second building to have air conditioning. The first was the hotel, just up the street. An advertisement from July of the opening season that offered a pre-theatre dinner at the hotel, complete with roses for the ladies for $1.50.

Scroll down for some information on the Galion:
http://tinyurl.com/lfdvm

This page shows the State Theater at 120 Harding Way East, so presumably this would be a different theater despite the proximity to the Galion:
http://tinyurl.com/rwvn2

This page shows before and after restoration of the Galion:
http://tinyurl.com/q4dkk

Chuck – it might be me, but it seems like the series of links you’ve posted dated 4/26 aren’t working. I’ve tried from a couple of different theater pages today with no luck. Thanks…

Tried the Galion link and it worked now…thanks!

The July 16, 1949, issue of Boxoffice announced that the Galion Theatre had opened on July 7. The house was the ninth in the Modern Theatres circuit, operated by P.E. Essick and Howard Reif. The Galion Theatre included a 30-foot stage with facilities to accommodate road shows.

The item also mentions the State Theatre, which was also operated by Modern Theatres. The State had been closed for the summer (probably due to its lack of air conditioning) but was to be reopened in the fall with a policy of westerns and action pictures.

The article attributes the design of the Galion to “…Matzinger & Grosell, Cleveland architects who specialize in theatre construction.” This would be Paul Matzinger, who began practicing in Cleveland in 1902, and Rudolph Grosel (the Boxoffice item about the Galion misspelled his surname) who Matzinger took on as a partner in the 1940s. Though both architects are long gone, there is a successor firm called Jencen Architecture which specializes in retail design.

The firm designed a number of theaters for the Modern Theatres circuit, including the Mayland, but I also found a list of buildings designed by Matzinger before 1930 which includes a Park Theatre at 1207 Starkweather Avenue, Cleveland, built in 1907. This building is still standing.

Just learned of this theatre through a theatre generated conversation. Always fun to learn about another theatre and to read the words…“this building is still standing”!

Google Street View from July of 2014 shows the theater still producing live productions…and there’s a 1960’s or 70’s Oldsmobile 442 parked across the street :)