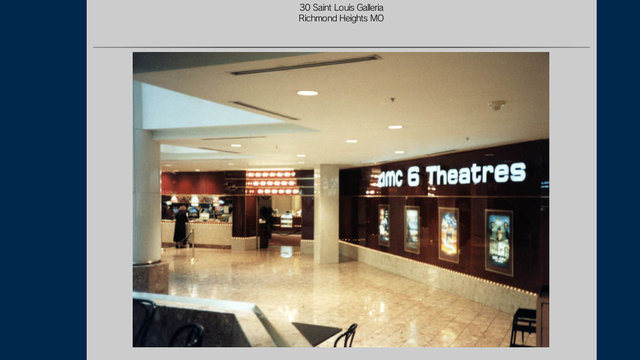 Located in Richmond Heights, to the west of St. Louis, MO. Galleria 6 Cinemas is a former AMC theater which opened May 23, 1986. It was taken over and remodeled by Harman Mosely. He added stadium seating in the two larger theaters and also added luxury seating in the other theaters. The lobby was remodeled and now includes a bar and a seating area. Galleria 6 Cinemas opened around December of 2001.

I never saw one movie in the Galleria theater however I played many a video game in the lobby. MANY video games. I remember one time in the early 90’s when a kid asked me and my friend if we had “two side quarters”. Looking my friend in the eye, I said “huh”. We later realized he wanted to know if we had .50 cents he could have. I had never heard anyone before or after that date ask me for “two side quarters”. They had some good games there to kill time while your parents were shopping though.

A very nice and somewhat quiet theater located in a very nice large mall. It helps that there is a curfew at this mall so seeing a movie at night is a pleasure since there aren’t tons and tons of teens hanging in the stores nor in the theater. I will be returning!

The original Galleria had 4 screens and was an AMC operation. The venue opened in May 1986.

Well my memory is not giving me a good definite time frame, but I believe it was 1988 when the two additional screens were added. I remember ‘Caddyshack 2’ and ‘The Dead Pool’ playing in #5, but nothing else before them.

Your recollection is correct, the Galleria became a 6-screen operation in March 1988.