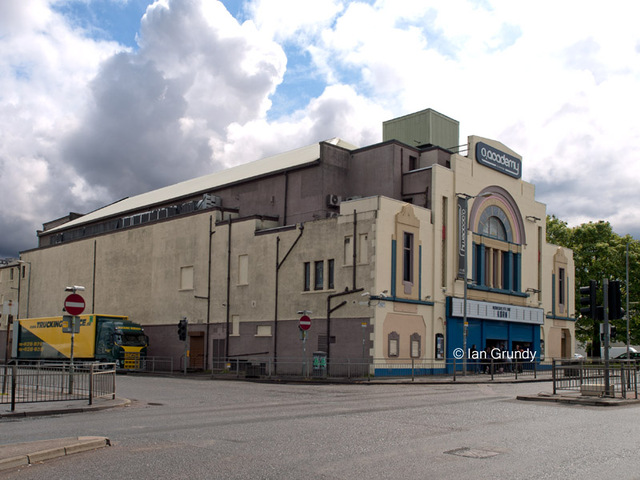 It was sold to Greens circuit in 1936 and they operated it as a move-over house from their main Playhouse Theatre.

The Bedford Picture House closed on 8th July 1983 and became one of the city’s busiest bingo clubs until it closed in 1993 and the building was boarded up and left empty.

In November 2002 it was purchased by the Academy Music Group Ltd and a three million pound restoration was carried out on the decaying building, restoring most of its architctural splendour. It re-opened as the 2,500 capacity, Glasgow Academy concert hall on 26th March 2003 with a concert by the Scottish band Deacon Blue.

Some more information and photographs of the Academy Glasgow here:
View link

Although now called the Carling Academy, Glasgow, the cinema is best known by it’s original name, the New Bedford. As mentioned, the cinema was built on the site of its predecessor, which was destroyed by fire in 1932. The first New Bedford had been a conversion of a church, and was still fairly recognisable as such externally. The New Bedford is right next door to the Coliseum, a conversion of a Frank Matcham music hall and theatre of 1905, originally opened as Moss’s Empire. The Coliseum was given major makeovers in 1931 and 1963, the latter being a total rebuild to become Glasgow’s Cinerama venue. After closure in 1980, and a spell on bingo, it now lies derelict, in sharp contrast to the newly restored Bedford next door.

Now called the O2 Academy after a change of sponsorship.

A night shot of the former Bedford in June 2011