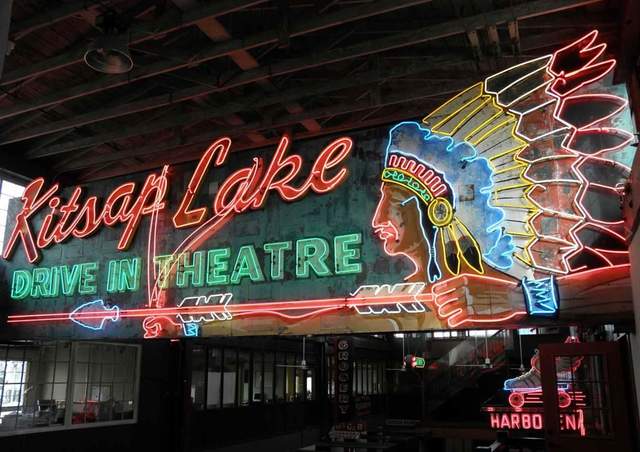 The Kitsap Lake Drive-In opened on June 30, 1953. It closed in 1982, possibly do to poor attendence, as the staff use to run from car to car inspecting what was going on all the time, or it could of been due to the encroaching urban expansion in Bremerton’s Kitsap Lake area. As that area saw a boom of expensive homes suddenly being built in that area in 1980. So possibly the property taxes and their profit margin wasn’t happening. But seeing that there wasn’t any way to adjust the configurations of the theater’s layout, they probably couldn’t suit their new neighborhood’s needs, and thus the owners elected to sell off the Kitsap Lake Drive-In and concentrate fully on upgrading, and expanding their other local outlet, the Rodeo Drive-In at Port Orchard/Bremerton Airport area.

The Kitsap Lake Drive-In was never actually sold to the Seven Gables company, rather the owner of the drive-in (and also of the nearby Rodeo Drive-In) merged his company (Cascade Theatres) with the Seattle Art House operator (Seven Gables), and the new company then operated under the Seven Gables name. The Kitsap Lake Drive-In was then sold off to a company that was intending to convert the property into a health club, which never happened. Unfortunately, the water and sewer capacities in the area could not support such an operation (something the new owner didn’t check in advance on). So as mentioned earlier, the property was then used for a storage yard for an electrical contractor until Puget Sound and Energy purchased it for their use as their new regional office center. All traces of this particular drive-in are now gone.

The most distinctive mark of the Kitsap Lake Drive-In was it’s unique sea green colored marquee, which mysteriously was also the same primer color that the Navy used back then in it’s local shipyard. But it had a Native American chief, aiming his neon bow and the animated arrow that streaked towards the entrance of the drive-in. The Kitsap Lake Drive-In became a twin screen in 1970. The drive-in showed commercial double features, for several years. The drive-in’s operating season was from the last week in March to the first week in October each year, until it closed the gates for good in October of 1982. After which, the Big Bear Drive-In closed it’s gates about 10 years later up in Poulsbo. Now the only drive-in that Kitsap County has is the Rodeo, all traces of the Kitsap Lake or the Big Bear are totally gone, the end of Americana. I moved here from Illinois, and it’s sad to see life as we knew it die out in any area. My daughter at least has had the drive-in experience that I enjoyed as a kid in my lifetime. She loves it.

I grew up on nearby Northlake Way in the 70s and remember going here several times as a kid, often watching the movie from the “overcab” bed in our camper! I kind of vaguely remember the sea green marquee mentioned. It also had a small drive-in style playground under the screen, similar but smaller than the one out at Rodeo Drive-in, which we also went to a few times. By the time I graduated high school in 1986 (still living on Northlake) I do remember the Kitsap Lake Drive-In being closed, but I recall there being swap meets there quite often on summer weekends (this may have overlapped their last few years of operation)… then later (I had gone away to college by now) I remember it being used as a storage yard as mentioned. I also recall very well the Indian Head sign, having driven by it hundred of times… I seem to remember it being there for quite a long time after they closed. I am going to ask my Mom who still lives in the area if it remains!

According to the city tax assessor and the Kitsap Lake Historical Society, this drive-in opened in 1953.

Nice opening story Rob,never heard of employees checking out what was going on in the cars.That is a first one.

I used to work there during summer of 69,70. Always had a lot of fun. Remember “Easy Rider”, we were packed every night. Where is the sign located in Seattle??

A closer address (at least for Google) is 6522 Kitsap Way, Bremerton, WA. Today, the Kitsap Service Center sits on part of the property.

You can still see a partial outline of the drive-in just to the west of the building and parking lot, but otherwise no trace remains. http://tinyurl.com/zomfxj9

That is one gorgeous sign. Also, RoadsideArchitecture was right.

Wow, what a marquee!! The marquee is now located at the K.R. Trigger building in Seattle, Washington.

There appears to be a smaller neon sign(roller skate, with a name underneath(partly hidden in the photo above)), behind the big Drive-in marquee(towards the right, seen underneatn to right).

More names in Boxoffice, June 27, 1953: “A large contingent from (Seattle) Filmrow attended the opening of the new Kitsap Lake Drive-In at Bremerton Monday (22). It is owned by Dwight Spracher, George Blair and Rex Thompson.”