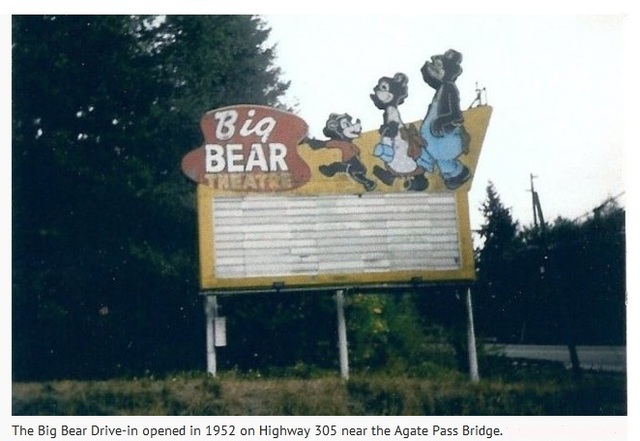 The Big Bear Drive-In was the typical American drive-in theatre icon on State Route 305, between Poulsbo and Suquamish near the Agate Pass Bride. It was built and operated by the Lilquist family of Poulsbo, who also operated the Almo Theatre indoor in downtown Poulsbro, which is now in retail use. The Big Bear Drive-In opened May 26, 1955 with “Chief Crazy Horse”, “Bear Country” & “Killers of the Swamp”. In 1981 it was showing adult movies to draw larger crowds. They had G to X rated movies that year, then closed their gates in 1988.

The owners of the Rodeo Drive-In then with an agreement, opened for one last time, in 1994, under the operation of the Rodeo Drive-In’s owner, until a gentlemans agreement was made and the Fred Hill Concrete and Gravel Company encroached and expanded into the drive-in’s entrance and back half of the lot, finally taking over all of the property making concrete and cement.

The unique sign that they had at the Big Bear Drive-In were the Three Bears, from the Goldilocks story. Papa, Mama, Baby Bear all up on the sign, with animated neon legs walking towards the entrance. It was surrounded by tall fir trees, and on occation, you sometimes did see a live black bear walking thru the lot, or raccoons. But it was a fun place to go on a hot night, as the surrounding woods acted as air conditioning, so it was cool there, even on the hottest of summer nights.

It was finally demolished in 1997, and from what I’ve been able to find out, the sign ended up in a Seattle storage lot, where it possibly still sits today. But if you drive thru there today, you would never know that there was even a drive-in, except for the casino that overpowers you when you’re in that area. The Big Bear Drive-In will always be in our hearts, for those of us who had that experience of being there.

Mrs. Lilquist (she was a substitute North Kitsap School teacher for many years) and her son owned both the Big Bear and The Almo (downtown Poulsbo). The building where the Almo was is not a bakery but currently an antique shop. Prior to that, it was a woman’s dress shop. I believe it closed as a theatre in the early to mid 80’s but may have my time wrong. My great aunt (Bell Jensen) owned The Almo before the Lilquists, back in the 30s/40s, I believe. The Big Bear sign did indeed end up in a scrap metal yard in the Magnolia area of Seattle, though the last time I was over there, the yard was empty.

At one time I was searching out old Drive-In’s and taking photographs of what remained of them. I remember it was either late ‘96 or early '97 we stumbled across the Three Bears Drive-In, pulled over and went in. At the time it appeared to me that they had only recenlty been showing films because inside the control building the projector was still up with film still in it, and the concessions looked to still be intact. I did notice lots of concrete/construction equipment parked all around the area. It was not too long after the visit that the area was flattened and the sign removed. I never was able to see a show there, but glad I stumbled across it before it was demolished.

I was never sure if it was called the Three Bears, or The Big Bear, but I saw many movies there growing up on Bainbridge Island.

The county newspaper, the Kitsap Sun, reported in June 2011 that a local signmaker had acquired the drive-in’s animated neon sign and planned to refurbish it. See the story and photo at http://www.kitsapsun.com/news/local-news/big-job-for-new-owner-of-big-bear-drive-in-sign

It was always the Big Bear and it opened on May 26th, 1955 with “Chief Crazy Horse”, “Bear Country”, “Killers of the Swamp” and two cartoons. The Almo location never became a bakery. It is currently Blue Heron Jewelry and prior to that, it was Cat’s Meow Antiques.