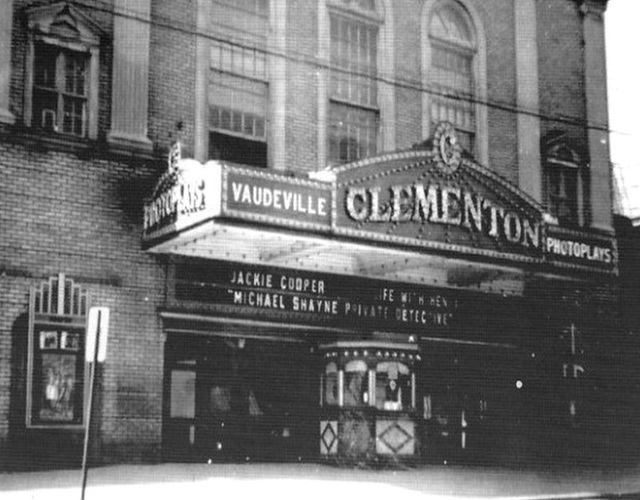 The Clemonton Theatre was opened on November 23, 1927, when a Lenoir organ was installed. By 1941 it was operated by Warner Bros. Circuit Management Corp. This theatre operated into the 1960’s and was demolished not long after closing.

Spelling should be “Clementon” for both the town and the theater.

On the satellite map this looks like part of a parking lot. I think that most of Clementon’s downtown, including this theater, was demolished in the 1960s in the name of redevelopment.

Listed in the 1944 FDY as part of Warner Bros. Listed as part of Stanley Warner Corp. in the 1961 Film Daily Yearbook.

Built in 1927 as a smaller version of Camden’s Stanley Theatre. Had a balcony and a full stage. Part of Stanley Warner from 1934 to its closing in the 1960s. Demolished in 1970.

The Clementon Theatre was later named The Kate Smith Theatre when the town was trying to breathe some life into the downtown area in the early 60’s. One by one, the wonderful shops accidentally caught on fire as the new Grant City shopping complex took away their business. The theatre was demolished in the mid to late 60’s — don’t remember exactly when – but it had been closed for a while.

Anywhere near the amusement park? I was last in Clementon around 1983.

The theatre was on the main street (Berlin Road, probably a 2 – 3 block walk from the entrance to Clementon Lake Park. I was actually last there in 1976 when I moved away, but grew up there from 1955-until I left in 1976. It was a wonderful place to be a child — unfortunately I don’t think I knew that then

It was a sad day, for me, when they tore the theater down. I got my first “legitimate” job there, in 1959, when I became an usher; going on to become an “attraction” as “Roland Jr” (based on the John Zacherle character, “Roland”, from TV’s “Shock Theater”). What impressed me most, about the theater, was how the Movie Screen was retractable -giving you more stage room. I also liked the balconies and the orchestra pit. It was truly a Theater!! They just don’t make them like that anymore.. what a pity. 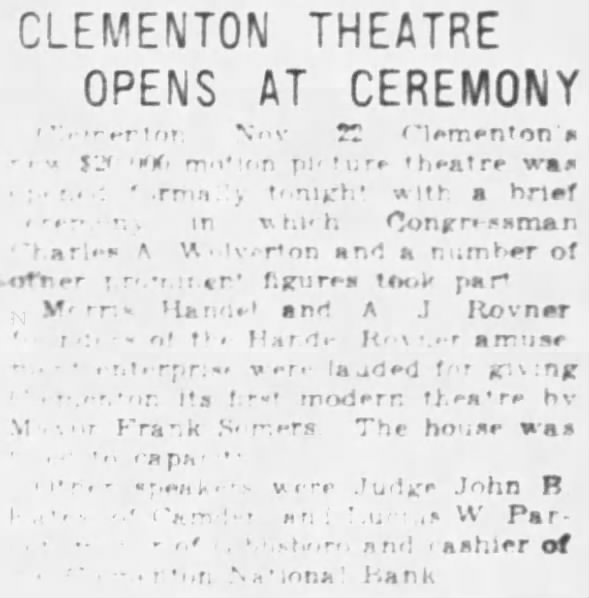