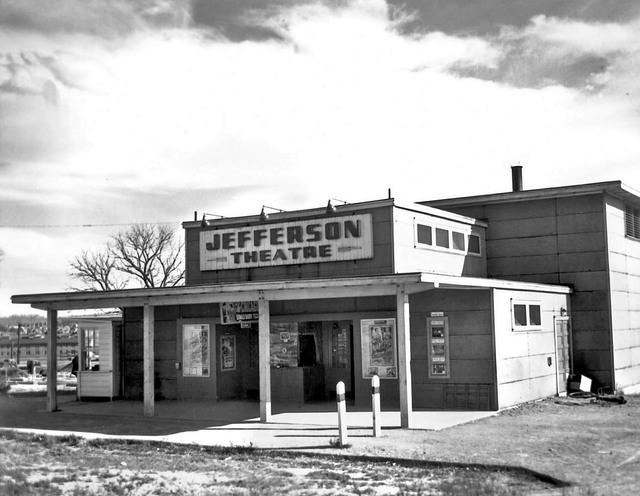 It briefly reopened as the Wayne Theatre. The building was destroyed by a fire in 1980.

Jefferson Circle is the connect between Lincoln Rd and Jefferson Ave. There is some confusion about this theatre. Individuals who I have corresponded with from the Oak Ridge area claim that the Oak Ridge Playhouse was previously called the Jefferson. It might have been although I haven’t located any record to date with the same address as the playhouse that went by any other name than the Centre Theatre.

The Jefferson was the fourth theater opened in Oak Ridge. Its recent opening was announced in the November 4, 1944, issue of Boxoffice Magazine. The Ridge, Center, and Grove Theatres had already opened. All four were being managed for the Recreation and Welfare Section of the Clinton Engineering Works by Walter Morris, a Knoxville theater owner.

The September 1, 1945, issue of Boxoffice says that seven theaters had been built at Oak Ridge by that time. Only the Middletown and Jefferson theaters were mentioned by name. The July 10, 1948, issue said that the Middletown Theatre in Oak Ridge had closed due to lack of business.

The May 4, 1952, Boxoffice mentioned the Skyway and Elza Drive-Ins at Oak Ridge, but I’ve been unable to discover if they were built by 1945, so they might or night not have been the other two theaters in the town. I got the feeling the two missing theaters were hardtops, though. Oak Ridge reached a population of about 75,000 during the war and could easily have supported seven walk-in theaters.

Following is a link to the Flickr page for the American Museum of Science and Energy in Oak Ridge, showing the Grove, Center, Jefferson and Ridge Theaters in Oak Ridge, all built by the Army Corps of Engineers for the Manhattan Project, 1942-1945. Also, the Skyway Drive-In, circa 1960s.

The Jefferson Theater opened on November 2, 1944, showing THOUSANDS CHEER. According to an article in “The Oak Ridger” in 2009, the Jefferson Theater closed in 1950, and after that it was briefly reopened as the Wayne Theater. The building burned in 1980

thanks for the many pictures Seeing1.