Open on February 25, 1926 with Matt Moore in “The First Year” and vaudeville acts on the stage. A Robert-Morton organ was installed. This theatre is listed as operating in the 1951 Film Daily Yearbook.

The auditorium has been demolished, but the front section of the building is now in office use.

I believe this is the building on Washington Ave. at the main intersection in town. If so, the auditorium has been demolished and the lobby structure has been redeveloped as retail/professional space.

The lobby structure is indeed still standing. The theatre was operated by Skorus Theatres. Accoring to the 1949 Film Daily Yearbook, it had 850 seats and was closed. I know that the auditorium was gone by the time I was growing up in Dumont in the 1960’s.

“In 1926 the Ruckle family built The Dumont Theatre on Washington Avenue. This beautifully appointed theatre, as fine as any of its size in New York city, was a great asset to the town; it showed the latest films and vaudeville. …… The pleasure afforded this community by the theatre lasted only three years. In 1929, when the Skouras movie chain leased the theatre, they ceased showing films since the chain operated the Palace in Bergenfield. Plays were presented by stock companies in the Dumont Theatre until 1930. When the theatre was closed, it was a severe blow to Dumont; the building remained unused except for a few streetlevel stores. In 1950 the Skouras chain bought the building from the Ruckle family and six years later it was purchased for a Borough Hall by the Mayor and Council. In 1964 it was sold to the Mansoldo Realty Building Corp.”

Does anyone know exactly where the theatre used to be? Across from the Old North Church or up further where borough hall is today?

Enter 128 Washington Avenue on Google and take a look at the building across the street from the church. I don’t have any personal knowledge of this theater, so I would like to know if any locals recognize this as the former Dumont. There is an interesting colonial building up the street, now a Wachovia bank, but I don’t think that was the theater building.

Yes, that building across from the church was the Dumont Theatre. The store with the awning was the original theatre entrance. The auditorium section was torn down and the marquee removed before I moved to Dumont in the early 1960’s, but you can clearly tell it was originally a theatre. I’ve been hunting for a picture of the theatre (unsuccessfully) for years. 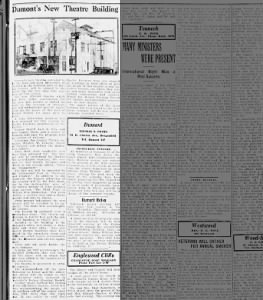