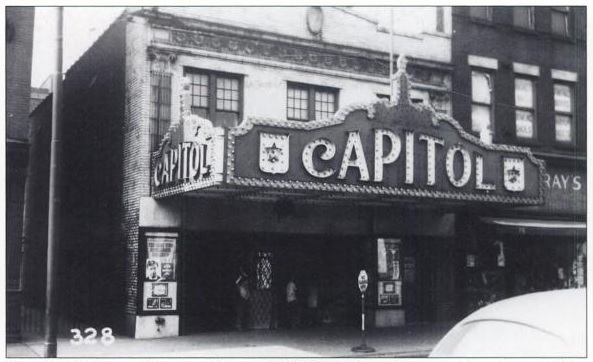 The Capitol Theatre was torn down for the Gregory Apartments in the early-1950’s.

They list the location of the Capitol as 64 Gregory Street, which does not currently map in mapquest. The theater was razed in the early 1950s for the construction of the Gregory Apartments. Can’t find any information on these apartments, perhaps they too were demolished.

Any help out there??

The Capitol Theater was located on the south side
of Newark Ave. (NOT Newark St.), east of Henderson.
The back of the theater was on Gregory (a parallel
street to the south of Newark Ave.), which may
explain why a Gregory St. address is used on Page
19 in the cited book. The photo in that book is of
the theater’s front on Newark Ave.

Both Gregory St. and that part of Newark Ave.
east of Henderson were eliminated when the
Gregory Apartments were built astride these
diagonally oriented streets. The apartments
are still there. Newark Ave. is the main commercial
street in that part of Jersey City. It started
at the intersection of Montgomery and Warren
(thus forming a “five corners intersection”) and
ran westward. An old map would show that
length of Newark Ave. between Warren and Henderson.

From the google photo of this address it looks like this theater has been demolished.

The Capitol held its official opening on January 3rd, 1927. Grand opening ad in the photo section.