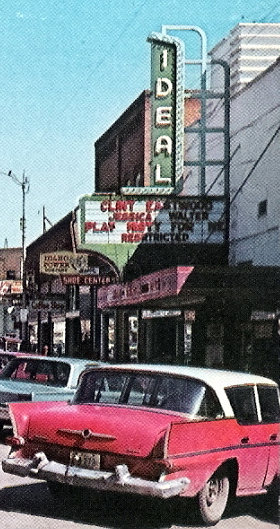 The Ideal Theater, which could seat 400, was one of two movie houses in downtown Emmett located on Main Street (the other being the Liberty Theatre). By 1950 it was operated by the Harris-Voeller Theatres chain.

For many years now it has been re-named Frontier Cinema.

The theatre is still in operation although many years ago it was renamed the FRONTIER.

The Original marquee, which had an upright sign, which spelled out â€œIDEALâ€ and a V-shaped marquee reader board below. It was a beautiful sign with lots of neon.

The entire marquee was removed and rough wood siding was applied to the outside to fit with the Frontier motif. A small reader board became part of the outer edge of the canopy above the entrance. As I remember, an old wagon was placed in the lobby.

The auditorium was long and narrow, had two side aisles, a stage, and from the outside what appears to be a stage house with fly loft. I never saw the stage in use and it may have been removed to add seats before the 50â€™s. (I grew up in Emmett in the 50’s and 60’s and attended the theatre weekly) The theatre has a small balcony with entrance stairs on either side of the lobby. (I remember the balcony a bit differently than it is now, so either my memory is off or it has been altered.)

Recently the rough wood has been removed and the exterior painted a sort of pink color. The exterior box office was removed back when the frontier theme was added, and the box office became part of the concession stand inside.

I understand that the theatre has a new owner and some people in town want him to rename it IDEAL, but a new marquee may be too expensive right now.

At he present time the theatre has no upright or marquee of any kind. Just some poster cases by the front doors.

The Art Moderne facade of the building has an air conditioner sticking out of the front. Looks like someone took a hammer and just broke through the brick and stucco and stuck it in.

I stopped by the Gem County Historical Museum and looked at a picture they had of the IDEAL in its glory days. It brought back fond memories.

I have pictures of what the theatre looks like now and will post them when this site gets its new photo system finished.

There is another photo and additional information on this page:
http://tinyurl.com/3ymf3n

Both of Emmett’s theaters, the Ideal and the Liberty, were in operation by 1920. Volume 4 of “History of Idaho: The Gem of the Mountains” by James H. Hawley, which was published that year, said that the Ideal Theatre was owned by Claude D. Bucknam, who also owned a half interest in the Liberty Theatre.