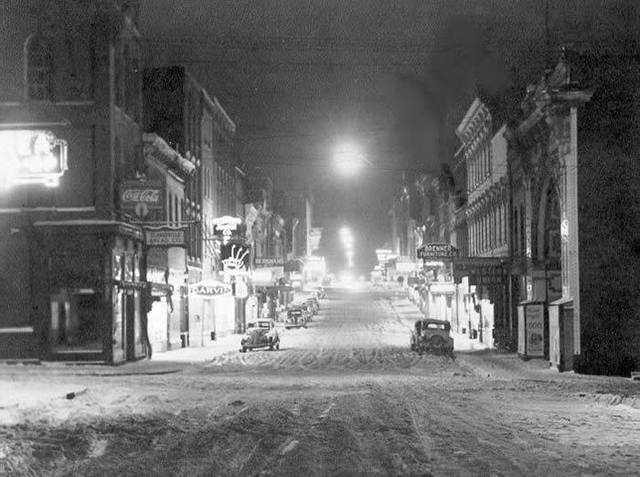 Among the few remaining Art Deco style theatres; Manhattan has Radio City Music Hall, Oakland, the Paramount Theatre and Clarksville, the Roxy Theatre. The Roxy Theatre is the phoenix that rose from the ashes of the first Lillian Theatre to become one of the premier showcases for film and later live theatre in Tennessee. It was designed by architectural firm Joseph & Joseph and opened October 7, 1915 as the Lillian Theatre. By 1939 it had been taken over by the Nashville, TN based Crescent Amusement Co. It was remodeled in 1941 to the plans of architectural firm Speight & Hibbs and was renamed Roxy Theatre, reopening December 25, 1941 with Wallace Beery in “The Man From Dakota”. It suffered another major fire in 1945 and was rebuilt, reopening in 1947. It had closed by 1957.

The Roxy Theatre is currently home to one of the state’s top drama companies, the Roxy Regional Theatre whose productions have included the American premiere of “A Tale of Two Cities”, the Steinbeck classics “Of Mice and Men” and “The Grapes of Wrath”, “Long Day’s Journey Into Night”, and “Antigone” while community highlights have included the regional premieres of “Triumph of Love”, “Side Show”, “The Rocky Horror Picture Show”, “The Who’s Tommy”, “Chess” as well as such blockbusters as “Grease”, “Smoke on the Mountain”, “Carousel” and “Damn Yankees”. Classic films were introduced to the programing in fall of 2016.

Drove to Clarksville a few years ago and saw the Roxy looked the same as the 2009 photos.

David Bowers “Encyclopedia of Automated Musical Instruments” p. 551 mentions the installation of a Reproduco organ at the Lillian Theatre, Clarksville, Tennessee. There is no date on that reference, but certainly before 1930. In all likelihood it a was photoplayer: very similar to an orchestrelle.

The Lillian Theatre was opened by Joseph Goldberg in 1912 or 1913. A major conflagration destroyed the house at the end of 1914 and it was rebuilt, as reported in the April 3, 1915, issue of The Moving Picture World:

“At Clarksville, Tenn., work was begun on March 8 preparatory to rebuilding the Lillian theater, destroyed by fire on December 30. A good deal of debris from the fire had to be removed before excavation could be started. The architects for the new house are Joseph & Joseph, of Louisville, Ky., who have built about thirty high class motion picture houses in Louisville and various cities through the South. The new theater will cost in the neighborhood of $20,000. The bulk of the stock is owned by the Colonial Amusement Company, of Nashville, Tenn.. but a part of it has been sold to the Clarksville investors, who took small blocks of a few shares at $10 a share.”The October 23 issue of the same publication had this item about the Lillian:

“At Clarksville, Tenn., the new Lillian theater has been completed at a cost of approximately $20,000 and will be ready to open during the next few days. The theater is one of the prettiest small houses in the state. The old Lillian theater was burned last fall in a fire which destroyed a large section of the principal business portion of the city.”

The theater description should probably include the fire in the mid-1940s (the official web site says 1945) which destroyed the house for a second time, and the subsequent rebuilding and reopening in 1947. I suspect that almost the only part of the Lillian Theatre remaining might be the east wall, adjacent to the parking lot, and possibly part of the back wall.

The east wall was most likely a common wall with an adjacent building erected at the same time as the second Lillian (the 1914 fire destroyed a number of buildings in the area) and would have to have been retained to support that building when the theater was rebuilt following the 1940s fire. The west wall along First Street looks like more modern brickwork and might date from 1947. There is some possibility that the Franklin Street facade dates from the Speight & Hibbs remodeling in 1941, which was to include a new front for the theater, but I’ve found no sources to confirm that it does.

Back in 2007 msimpson83 asked if there were plans to demolish the Roxy and replace it with an entirely new theater. The official web site say yes, alas. The project has not yet gotten underway, probably due to the difficulty of raising funds in the slack economy of recent years.

Current article about the damaged marquee.

This opened as the Lillian theatre on October 7th, 1915. article below:

Closed down in 1929 and reopened as the new Lillian theatre on December 22nd, 1930. Grand opening ad in the photo section. 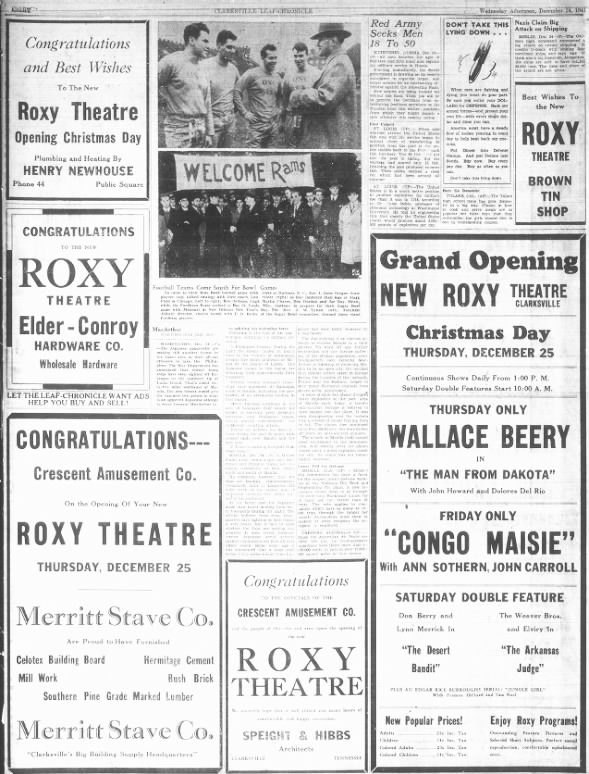 Grand opening of the Roxy Theatre was March 27, 1947 with “Wake up and Dream.” It replaced the previous Roxy that was destroyed on December 16. 1945. Ad in photos. At relaunch, the new Roxy had taken over an adjoining building to reach its new seat count of 920. Martin Theatres Circuit closed the Roxy in 1980. Locals took over the theatre relaunching it for live theatre on November 3, 1983.

If the rebuilt Roxy expanded onto the site of the adjacent building then the original theater’s sidewall could not have been incorporated in the project, and that makes it unlikely that any of the original back wall was saved either.