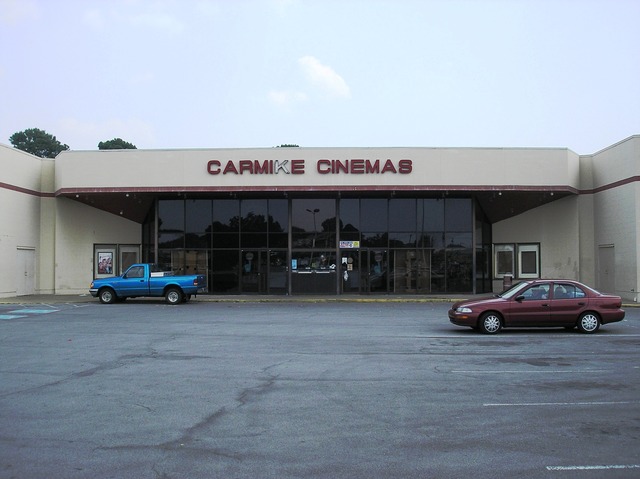 Current photos of the Carmike Martin can be viewed at:
http://www.flickr.com/photos/maincourse/

Maybe you’re getting the Martin Theater and the Carmike 8 a little mixed up. The Martin theater was located on Riverside Dr., with the Carmike 8 located on Madison St. (41-A). I’m a Clarksville native, who grew up in the 80’s viewing at both theaters. The Carmike 8 was the more popular of the two at that time, with the Martin theater being known as “the cheap movie”. By the early 1990’s the Martin theater had become “the 99 cent movie”, which showed flix that had been out for a while for a very inexpensive rate. Shortly there after, the Martin fell into disrepair and closed it’s doors. The building stood vacant for quite sometime untill being remodeled into what has been for several years now the Clarksville Family Bible Church. Upon the Martin’s closing, the Carmike 8 was the only cinema for several years. The Carmike 8 now itself has fallen into disrepair and has been given the same “99 cent movie” title as the Martin before it. Most moviegoers now do their viewing at the newly remodeled Carmike 10 in Governor’s Square Mall or the Great Escape 16 located off of I-24 Exit 1.

Thank you for the update. When I went for the photo shoot I got a plethora of accounts as to which cinema was what and couldnâ€™t make an exact determination.

I go to this theater every once in a while. It has been reduced to a discount movie house and is badly in need of repairs.

If this theater is like the Carmike 10 in Asheville, the chain is a rip off. They way over charge for drinks and popcorn. Their large isn’t even as big as Regal’s meduim and the price is $6.25. Only if I am desperate do I attend this theater. It would suit me just fine if the chain was sold.

This theatre is now closed. It’s too bad, too, because I have a lot of fond memories of this theatre as a child. And yes, this shouldn’t be confused with the Martin 4, which is now a church.

The former Martin 4 is beside Big Lots, right? Anyways, I’ve got pictures of the Carmike 8 if anyone wants them. I’m sorry they’re not very big or very good, but they were taken on my cellphone.
View link
View link

This opened on July 28th, 1977 as the Capri Twin by Martin Theatres. Grand opening ad in the photo section.

4 screens on May 20th, 1983 and renamed Carmike Cinema 8 on November 14th, 1986 with the addition of four more screens. Grand opening ads in the photo section.