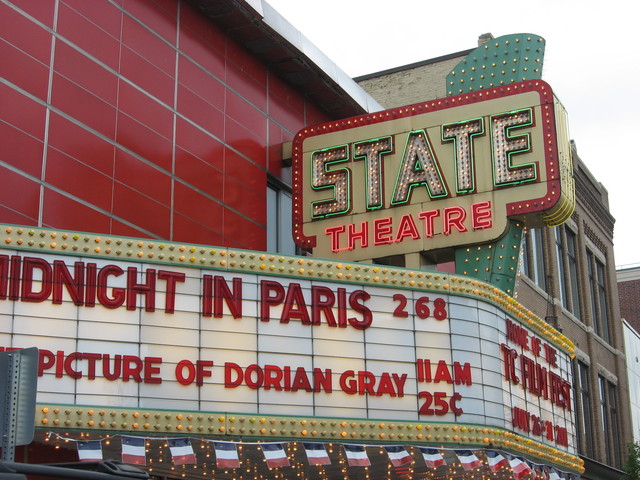 Built on the site of the Lyric Theatre which was destroyed by a fire on January 3, 1948. (It has its own page on Cinema Treasures).

The State Theatre closed on September 10, 1978 for remodeling into a twin screen cinema. In December 1984 it was purchased by the Kerasotes chain.

In January 1996 the State Theatre was purchased by Barry Cole for the Michigan Ensemble Theatre and it closed as movie theatre on April 13, 1996. A 6.9 million renovation into a Community Performing Arts Center was envisaged, but these plans stalled.

In September 2003 another restoration group took on a restoration project on the State Theatre.

In June 2005 it was given a general cleaning and fix up to prepare for the Traverse City Film Festival in July 2005.

The State Theatre was officially reopened on November 17, 2007 with a gala premiere of “The Kite Runner”. Today she sits in great shape with her neon State upright sign and large marquee in funtioning order.

The State Theatre has a prominent role at the beginning of a new Lip Dub video, featuring the people of Traverse City. The link should be easy to find on YouTube.

The State Theatre is developing a second theater behind the State dubbed “Bijou by the Bay” in the old Con Foster Museum. Details at http://www.freep.com/article/20130614/ENT01/306140063/Traverse-City-Film-Festival-readying-2nd-theater

The State Theatre has the most comfortable and easy viewing seats in town. Refreshments are extremely reasonable in price and the volunteers are very friendly. Great prices and some shows are free or reduced on certain days. The visually restored and pleasing theatre is a great way to experience films.

Visited this theater years and years ago when I was growing up and we would visit my Grandparents in Traverse City for a few days. I do remember seeing “Raiders of the Lost Ark” there in 1981. It was always neat to see the bright sign and marquee when you traveled down Front Street!

While the December 18, 1923, issue of the Traverse City Record-Eagle, writing about the new Lyric Theatre that was soon to open, explicitly stated of the new house that “…none of the wall space of the old Lyric [was] used in the new structure,” I doubt that was the case with the rebuilding of the second Lyric as the State in 1949. For one thing, the State has a stage house, and it seems very unlikely that the movie-oriented Butterfield interests would have built an entirely new, small town theater with a stage house as late as that year. It must have survived from the Lyric of 1923.

For another, the Record-Eagle article of 1923 was at pains to note the fire resistant design of the new Lyric, though it did say that parts of the theater featured wooden wall paneling. What with the paneling, and all the upholstery, draperies, carpets, and other accouterments of the theater there was undoubtedly plenty to burn in the 1949 fire, but it is very likely that the solidly built 1923 walls would have survived and that the State Theatre was built within them.

This theater was mentioned, together with the photo added to the photo section, in the New York Daily News on Sunday, June 25, 2017 in an article about Leelanau County near Lake Michigan. Link

It has undoubtedly been reseated with larger seats and more leg room (…“the most comfortable and easy viewing seats in town” according to the earlier comment by baileysporck.)