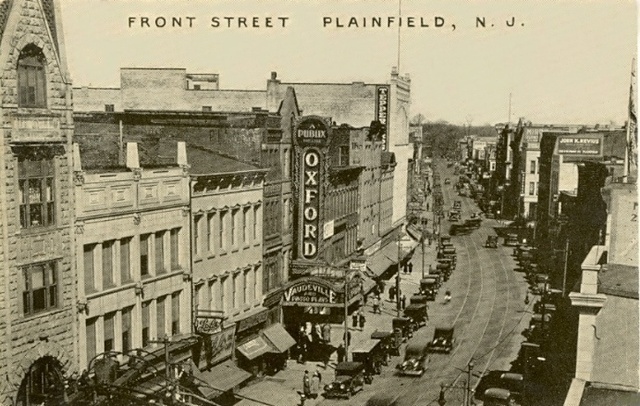 Go to this link and type “theatre” in the search block for old postcards of both the Proctor’s and Oxford marquees:

Originally built as Stillman’s Music Hall. Opened on 10/18/1884 with 800 patrons paying an exorbitant $2.50 for reserved seats. Later known as Proctors (starting in 1908) and still later Oxford.
In 1899, the first full length moving picture to be shown in Plainfield, The Great Train Robbery, was shown at Stillman.

Correction to my earlier email – this theater was NOT the Plainfield Theater.

The theater is demolished – nothing but an empty lot now.

I remember the Oxford very well from the 1950s. My uncle, Ted Fulton, worked there as a projectionist. My brother and I spent a lot of time there. It was very ornate on the inside with a large lobby where popcorn and candy were sold, a balcony, and a special roped off area called the loge where the seats were red velvet and had once been more expensive than other seats in the theatre. In the early 50s, it also at least once hosted a small circus with clowns and performing animals including a baby elephant named Wanda.

My memory which may be flawed as I was quite young is that the Oxford was closed and possibly even demolished in the late 1950s, but perhaps it was just closed and the building used for other purposes. Sad to hear there is nothing there now but an empty lot!

hsgolann – I believe your post of 4/27/2011, i believe youre referring to the Paramount on the corner of 2nd St and Park Ave. I attended a movie there once in the 50’s and all I remember of it is the ornate lobby with an open stairway in the lobby. That was long torn down when the whole block was demolished for the Plainfield Renovation project which died during the race riots of the early 70’s. Looks like some development may be finally happening, judging by Google street view. I have yet to find out where the Oxford was located as I do not remember it from my 50’s to 60’s childhood growing up in Plainfield.

Dear Jamestow, I remember the Paramount and the Strand too but the Oxford was the Oxford always and was on West Front Street. It was demolished sometime in the late 50’s. I know because my uncle died in 1955 and my mother always said she was glad he didn’t live to see it demolished. It was very ornate inside and had a loge area that was extra fancy but had already been closed in the 50s. My brother and I used to sit there though because it was right under the projection room and allowed our uncle to keep track of us.