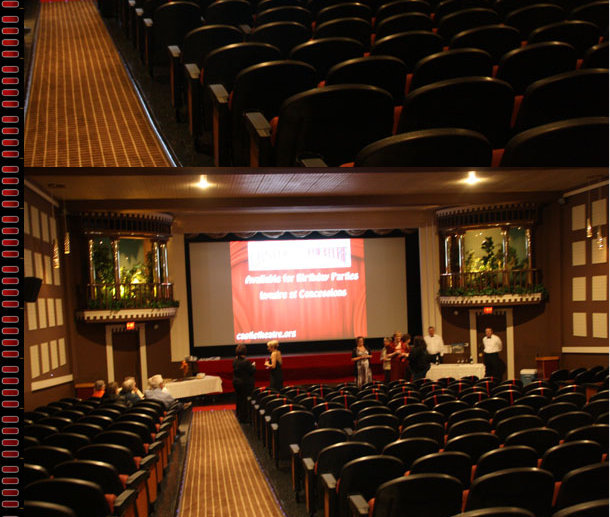 This is a small town theatre I found while on a road trip of other theatres. Built in 1935, this theatre blends in nicely with the other Main Street buildings. It has a castle-like battlement along the roof line. There is a small marquee with the theatre name in neon and there is no vertical sign. The architects were Wetherell & Harrison who, I was told, had an office in Des Moines, Iowa.

This is a Fridley Theatre, not an independent:
http://www.fridleytheatres.com/manchester.htm

Here is the updated site:
http://tinyurl.com/4zofu6

Recent article about the community support the Castle is currently enjoying: View link

Some History on the Castle Theatre: The Castle Theatre opened in 1935, and is the only theater in Delaware County. In 2009 a group of concerned citizens received word that their local movie theater was soon closing. After many meetings, research was done in other community run theaters, a Board was formed, the non-profit status was established, theater assets were purchased, teams of volunteers were organized, movie contracts were signed, operating plans were developed, two part-time managers were hired to run the day-to-day operations, a website was created and the funds were raised to cover the initial start up costs.

The Board consists of nine local citizens and two area high school students. There are a handful of committee members who also have assisted the Board in other projects. Since taking over ownership from Fridley Theatres of Des Moines in early September 2009, Friends of Castle Theatre members and other individuals have spent hundreds of hours working on the Castle Theatre. The project included a much needed and thorough cleaning of the lobby, concession area and auditorium. Necessary repairs and improvements continue to be made throughout the building.
The lobby and concession area received a new facelift featuring new paint and wallpaper. During this time, the theatre’s projection equipment was also refurbished, repaired and upgraded. An ongoing restoration of the familiar downtown Manchester icon – the Castle Theatre’s marquee – included the replacement of the neon sign, a new roof and a fresh paint job. The outdoor poster boxes were also repaired. The theatre reopened October 23, 2009 with a fresh new look and a first-run movie showing every night at 7 p.m. Volunteers continue to staff the theater’s the theater’s ticket booth, concessions and projector. Having a viable movie theater is important to the overall health of Manchester and Delaware County in giving it’s citizens a choice of entertainment for all ages. Grand Re-Opening was held on November 13-15, 2009 website

The marquee for this theatre shows up in a crime documentary series called “Killer Cases.”