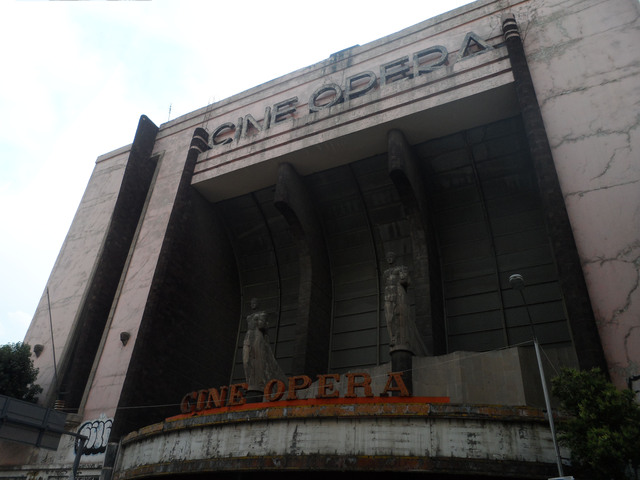 Construction was started on this theatre in 1942, but it wasn’t completed until it eventually opened on 11th March 1949 with the film “Una Familia de Tantas” (1949) starring Fernando Soler, David Silva and Martha Roth.

The 4,200-seat second run movie theatre, was designed in a splendid Art Deco style by architect Felix T. Nuncio who was assisted by construction engineer Manuel Moreno Torres. A feature of the building was the huge recessed glazed window which allowed light into the large vestibule and foyer. Standing above the marquee are two female figures carved out of stone. Interior decorations were carried out by Manuel Fontanals and seating in the auditorium was provided in orchestra and balcony levels. The ceiling had coves containing concealed lighting, and there was a huge chandelier hanging from the centre of the ceiling.

The Cine Opera was still listed as operating as a 3,500 seat capacity cinema in 1971 (the eventual closing date is unknown). It later re-opened as a rock concert venue known as Teatro Opera. This too has now closed and the building stands empty and unused.

Part of the marquee and facade of the Cine Opera, photographed in February 2007:
http://www.flickr.com/photos/cazucito/1415838466/

When you look at the map view for the recently added Cine Roxy, a user photo of the Cine Opera shows up.
http://tinyurl.com/ycmcwn9