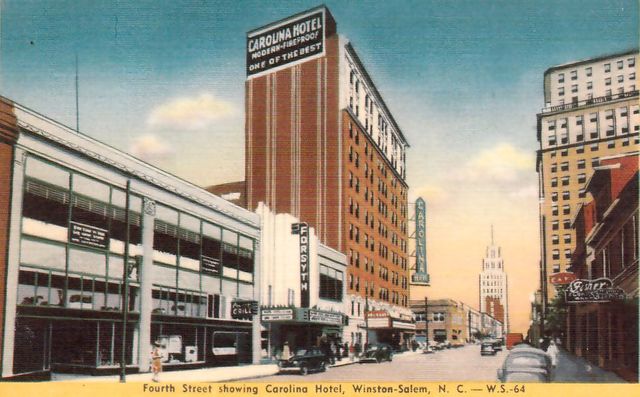 The Forsyth Theatre opened on W. Fourth Street near N. Marshall Street in 1937. This Art Moderne style movie house sat 500 and was located just down the street from the Carolina Theatre. By 1941 it was operated by the Paramount-Wilby-Kincey Circuit. The Forsyth Theatre closed in 1954. It was demolished and a Woolworth’s store was built on the site.

The Winston can be seen in this 1958 photo. I also note the State and Colonial in Winston-Salem. None of the three have been listed to date.
http://tinyurl.com/6jet57

From the 1940s a postcard view of the Forsyth Theatre in Winston-Salem.

The caption of a photo of the Woolworth store the book “Winston-Salem” by Molly Grogan Rawls says that the store, opened in 1955, replaced three shops and the Forsyth Theatre. Comparison of photos shows that the new Woolworth’s was in the same building the shops and theater had occupied.