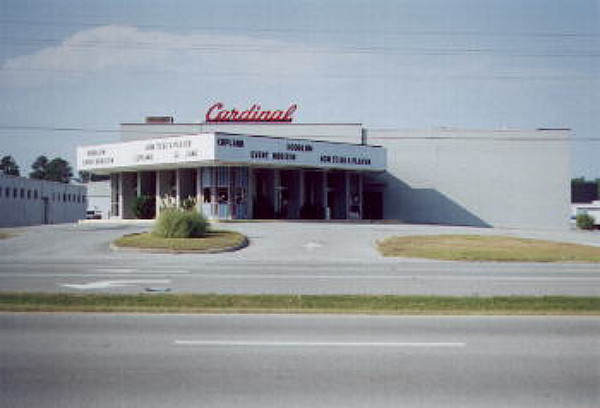 The Cardinal Theater was Eastern North Carolina’s first ever Ultra-Vision cinema. It opened under Wilby-Kincey Theatres on July 2, 1969 with John Wayne in “True Grit”. A second screen was added in late-1975. At some point new walls were built on each side and another two screens were added. The Cardinal Theater closed in June of 1999. A night club is now located in the building.

In December 1983 the Cardinal theatre was managed by Clifton Clement.IT was a PLITT THEATRE.

This place was a real bird.

TSLOEWS I would love to see some of your marquees.You certainly have a WAY with words.

Anyone interested,on Facebook there is REMEMBERING PLITT THEATRES for anyone that worked for PLitt.

The Cardinal Theatre opened on July 2,1969 with John Wayne in TRUE GRIT…..This was an ULTRAVISION theatre

Saw “Jaws” when it opened there. Only seats available were on the front row, looking straight up into the largest screen around at the time. Oh, when that head popped up through the sunken boat!

Saw THE RETURN OF THE JEDI opening weekend here when the Cardinal was a twin theater on May 26,1983. Played in the largest auditorium with a seating capacity of 750.

“JAWS” played at Jacksonville’s Cardinal Theater first-run on July 25,1975 when this was a single screener under ABC Southeastern Theatres.

Opening in 1969, this theater was originally a single screen theater. The first movie to be shown there was “True Grit”. Another screen was added on the right side of the building to make it a twin. Later on, walls were constructed on both sides to make it into a quadraplex. It’s last day of operation was June 3, 1999. It is now a night club (The Party Zone).