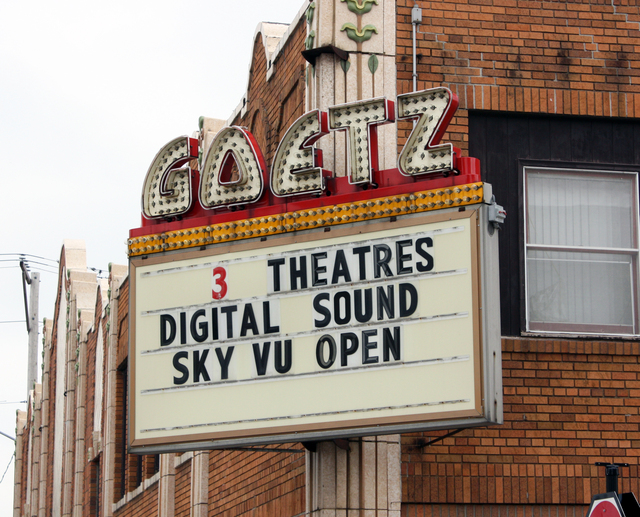 The Goetz Theatre is in an Atmospheric Spanish Renissance style with some Art Deco accents. It was opened on September 2, 1931. Like other buildings in Monroe, a Swiss style roof was added over the front doors. I’m sure this was not part of the original design. There are now three screens, with the original auditorium remaining intact and the two extra screens located within the Goetz Building. Since December 13, 2011, it has become an ‘all digital’ theatre.

The Goetz Theatre is owned by the same person who owns the Sky-Vu Drive-In outside of town.

The installation of the “Swiss” marquee at the Goetz Theatre was the subject of an item in Boxoffice of September 13, 1965. The item said that the marquee being replaced had been on the theater since its opening in 1931.

See Clint is playing there.

(September 22, 1956)
Goetz Theater Opens Week of Celebration Of 25th Anniversary
Hundreds of area citizens turned out last night to see a top-rated motion picture and observe the 25th anniversary of the Goetz theater in Monroe.
Theater-goers last night saw the film “High Society” and were given free tickets to a coming attraction by the management.
The anniversary film will be shown for seven days.
The Goetz theater represents culmination of a dream of Chester Goetz and his brother, Leon. Chester Goetz bought out interests of his brother May 10, 1939, and the partnership then included the late Mrs. Chester Goetz and their two sons, Robert and Nathan.
The theater opened officially Sept. 2, 1931, and the Chalet theater was added for theatergoers in February of 1939. The latest addition, the Sky-Vu drivein theater on Highway 69 south was constructed in 1952.
The Goetz theater originally represented an estimated investment of $125,000 and was of Spanish design. The complete business block owned by the Goetz interests and comprising two store spaces and offices on the floor above was valued at $150,000 in 1931 after its completion.