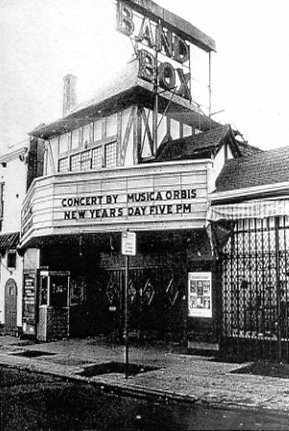 A small side street theatre that outlasted its larger rivals around Germantown Avenue and W. Chelten Avenue. The 499-seat Band Box Theatre was opened on February 3, 1930, screening foreign movies, the first being “Die Meistersinger”. Taken over by William Goldman Theaters Inc., it was refurbished in 1935 to the plans of architectural firm Fleisher & Stephens. In the late-1960’s and early-1970’s it was operated by Art Carduner as one of Philadelphia’s very few venues for art and foreign films. It was closed on November 6, 1977 with David Chiang in “Triple Irons” & Billy Dee Williams in “Hit!”.

It become warehouse space for a candy company. By 2015 it was in use as office space.

I loved going to the Bandbox when I was a teen in Philly in the late 1960s. Art Carduner was a culture hero of mine for his programming and the great program notes he wrote. Much of my early movie education took place in this theater – from “Citizen Kane” to “Morgan!” to “Pierrot le Fou.” It was an adventure to get to from the Northeast (via public transportation) but you knew you were going to see something very special!

I remember Hecate’s Circle very well. Danny Starobin turned me on to the place and I saw Sweet Stavin Chain play dozens of times there. Danny and I got to know each other while I was caddying for his pop at Ashbourne C.C. Danny showed up to talk to his dad and got the worst treatment from his pop…made me sick. I dropped the golf bag and told him I don’t work for assholes. We became friends . I miss him. RIP Danny.

Once, in the late 1960s, when it was an “art-house theater”, I saw Buster Keaton’s “The General”, with live accompaniment.

Dear Calcynic, Thanks for the sweet not about my dear departed cousin, Danny. I loved my unc., but he wasn’t exactly the easiest guy to get along with. Freddy, I saw it too!!!

Today, the Band Box Theatre is home to the Germantown Recovery Community, a facility of NHS Human Services, Inc.

Can someone tell me who owned the bandbox in 1960?

Art Carduner owned the Bandbox and it was then THE place in Philadelphia to see art, repertory, foreign, silents, and historical cinema during the 1960s. The Bandbox would also play some of the great silent films to live improvised piano accompaniment by Paul Garabedian, a great local musician who would get standing ovations for his performances there. Mr. Carduner would come over to my family’s house for book club meetings held there. And Mr. Garabedian also frequently visited as a family friend. I also remember David Starobin who worked at the Bandbox. David was the brother of Danny Starobin, who calcynic mentions above, and they both played together in a blues band called Sweet Stavin' Chain. I didn’t see the group play at the Bandbox, but did see them perform as the opening act for Buddy Guy at The Electric Factory in the late 1960s.

My dad used to take me here regularly in the late 60s, early 70s. The mini marquis perpetually read, “COMING SOON! THE LOST WORLD” Two years is a lifetime to a kid and I was miffed at his idea of soon. My dad had me primed for a good dinosaur flick. I saw King Kong here. I also saw my first Marx Brothers double feature and became a lifelong fan. I remember the guy had a Nickleodeon in the lobby, one of those automatic flip the pictures thingies that fired up with a coin. My dad must have known Art because they always had long reminiscences after the show.

There were NO other repertory art houses in Philly during the mid to late 1960s, only my beloved Band Box. What most folks don’t know is that Armat Street in Germantown was named for Thomas Armat, one of the inventors of the motion picture, whose patents were bought out by Thomas Edison. I am not sure that Art Carduner knew this. Art, where art thou? Wherever, thank you.

The Band Box Theatre launched with art and foreign films on February 3, 1930 for the Motion Picture Guild Circuit. The German film, “Die Meistersinger” launched the venue. It was the MPG’s sister location to the downtown Little Theatre. The diminutive Band Box opened with just 202 seats. In 1935, William Goldman had the venue refreshed to the plans of Fleisher & Stephens. The Band Box closed with David Chiang in “Triple Irons” and Billy Dee Williams and Richard Pryor in “Hit!” The theater was part of a sheriff’s auction in 1979 and did not ever play another film.