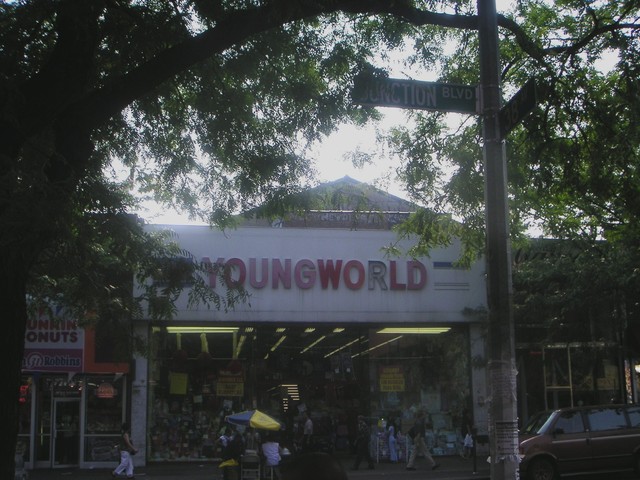 The Corona Theatre is located at 37-80 Junction Boulevard, opposite 38th Avenue. It was opened in 1926 by the Small-Strasberg Circuit. It was still open in 1953.

Since in those days I was really more interested in the movie than the movie houses I donâ€™t think Iâ€™m a very good source for great detail. I would think however that many of the movie houses at that time such as the Plaza and the Granada were built originally with stage shows in mind but later used full time for movies. By the time I first went to the Granada the place was in a very much neglected condition and was showing bottom of the line movies. It was a huge theater with very few customers. Some of whom you would wonder about. I do not think just because it had a Spanish name that the dÃ©cor was Spanish. I think places like the Plaza and the Granada were built more on the European theater style. The Corona was different. As I can remember it did not have a balcony where people sat. It was just a second floor used mostly for restrooms. It was more of a current day style and not built on the European style as was the other two although it was comfortable and well kept. The Corona and Granada had a cashier booth in front of the theater. There was a concession stand as you entered the center of the outer lobby. Each theater had a center aisle and two smaller side aisles. The seats were plush and there was decorative carpeting running down the aisles. I donâ€™t recall the lighting, there could have been chandeliers. Smoking was allowed in certain sections of the theaters, probably only in the back.

While staying with relatives at 41-23-95th St, Elmhurst, L.I., from March to July 1951, I often went to the Corona for Saturday morning kids shows with neighborhood boys Artie Hopkins and Tommy.
I also clearly remember seeing “The Thing” and the marquee had creepy looking things hanging from it.
Upon entering the auditorium, I stupidly sat down where a seat was missing, which caused my parents to laugh out loud during a tense moment in the film.
The greengrocers shop next door was owned by a friendly Italian gent named Sid and he always addressed me as the “Limey Kid."
I went back in 1998 to show my wife… and all was gone, but ah, such happy memories still linger on at age 68!

Growing up in this neighborhood, I didn’t recognize the theater until I saw Warren’s picture of the marquee. However, I can’t ever recall it as showing films. I do remember once going inside when it was used as a bingo hall, probably in the late 1950s.

For those in the know, is this View link the Corona the page is about?

A little known fact was that the Corona Theatre was used by Mike Todd for a number of Todd/AO tests…go figure.

Meanwhile, Monika, to answer your question posted above on April 25, 2011, the theater depicted in the linked image is indeed the Corona Theatre we are discussing here. The view is from the elevated IRT train platform looking down Junction Blvd to the north. The titles listed on the marquee were released in 1953, so we also have a time frame for the image. The art deco looking clock tower on the right side of the street (corner of Junction and 38th Ave) is no longer in existence.

Thank you, Ed! I appreciate it very much. Is the elevated platform still there?

The photographer, Vivian Maier, spent time photographing urban areas of both New York and Chicago. Thank you with your help putting a spot on the map for me.

Yes. The 7 train still runs along the same elevated tracks above Roosevelt Avenue.

While the Corona Theatre is not listed in the FDY until 1930, I suspect it was opened sooner. There is a photo of the Corona with the 1927 silent movie Let It Rain on the marquee. It was certainly possible to show an older movie in 1930, but it would have been odd for even a neighborhood house in a competitive theater market like New York to be running a silent movie as its feature film in 1930.

The Corona was originally operated by S&S Theatres, and an item in the February 3, 1926 issue of Variety said that a theater was being built for Strausberg and Small at Junction Boulevard and Roosevelt Avenue in Corona. This must have been the Corona. Architect for the project was Eugene DeRosa.