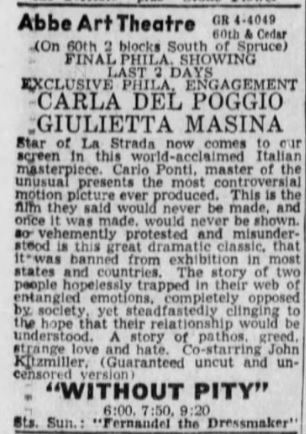 A neighborhood theatre in Cobbs Creek district, West Philadelphia. The Cedar Theatre was opened in 1913. It was equipped with a Kimball 2 manual 6 ranks organ. In October 1939 it was given a Streamline Moderne style makeover to the plans of architect David Supowitz.

When its policy shifted to adults-only, the operators tried the oldest trick in the book: adopting a name that would place them at the beginning of the alphabetical listings in the papers. Thus the Cedar Theatre became the Abbe Art Cinema on September 24, 1959, initially screening foreign movies before turning to adult movies.

Something called the Aarde Cinema knocked the Abbe Art Cinema out of first place in the early-1970’s listings and VCRs killed off its business when it closed on October 27, 1972.

It was eventually demolished and a new building on the site contained Gino’s Restaurant.

I would say that this theater became the Abbe around 1960. It was an “art” theatre at that time which meant that mostly showed legitimate European films, including some great ones as well as sensational ones. Some theatres in the neighborhood guide called them selves Aart theatres and even AAA Art theatres until the papers put a stop to the foolishness.

I can’t say for sure that there was never an Aarde Theatre, but I think the description above is referring to the Aardvark Theatre. It was opened ca. 1961 or 1962 by a guy named Max Raab as an art theatre for a tax shelter. A purist, he only ran single features until economic necessity forced him to go to the standard doubles. His big score was getting VIRIDIANA first run for Phila. It wasn’t open for very long. If listed on this site it wouldn’t be under Aardvark. It was a little theatre not far from the Wayne Avenue Playhouse, I think it was on the other side of the railroad—looking at the map I would say somewhere like Wingohocking Street not far from where it meets Germantown Avenue. I’d like to know if that theatre is on this site.

… I would say — around 1960 — mostly — can’t say for sure — I think — wasn’t open very long — little theatre — not far from — think it was on the other side — would say somewhere like… A lot of vague information! I think it would be nice if information was verified before it is posted!

The theater was demolished and the site is now home to a K Donut/Cedar Laundromat. Cinema Treasures lists it as closed in the overview. That should be changed to demolished.

The Cedar Theatre appears to have opened here in 1913. It was known as the “Theater with a Personality.” The theatre was part of the Nixon-Nirdlinger Circuit. It converted to sound and, in October of 1939, the theatre received a streamlined makeover to the plans of David Supowitz.

The theatre continued into the late 1950s as the Cedar. The theatre was refreshed becoming the Abbe Art Cinema that launched here on September 24, 1959 with “The Mistress” and “The Surf.” It closed permanently on October 27, 1972 with Barbara Bennet in “Kiss This Miss” and “Temptation & Sin.”