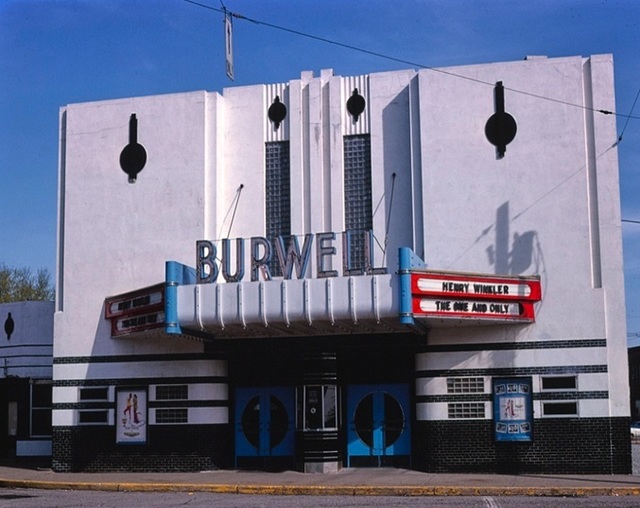 This elegant Streamline Moderne movie house opened in 1938, with seating for 780. Unfortunately, the Burwell was razed in 1990.

Any further information on this theater would be appreciated.

I saw my very first movie in the Burwell. The film was “The Goonies” and unfortunately the film broke down half way through. We were given passes to come back and watch the film at a later date, but sadly the theater was shut down before my parents had time to take me back. It was but a few of the classic theaters left that were once in the city of Parkersburg, and sadly as you look upon the site now, you can see a very new, very modern, CVS pharmacy. /sigh

Operated by the JUR Theater Circuit in the early sixties.

Here is an undated photo:
http://tinyurl.com/yskuj3

The JUR Theatre Circuit also had their offices in a connected art deco building on the left side of the buidilng. this theatre was a masterpiece of art deco styling. It was a great shame when this theatre was torn down. the vitrolite exterior and the use of vitrolite in the lobby was amazing.

Yes, the Burwell was one of a kind. JUR theatre operations eventually left the adjacent building for a suite near the Smoot theatre across town. The rocker chairs at the Burwell are still the most comfortable I’ve ever experienced.

I simply can’t remember the Burwell holding 780 seats. I remember at least 400, but beyond that, not so sure. The place was especially beautiful at night. And when you combined that night view with the smell of the fresh bread from the nearby Stork bakery…Ahhhhhh

I can tell you that my friend and I were the only ones there for the last film ever shown before shutting it down. It was “Leatherface: Texas Chainsaw Massacre 3”. It was really sad walking out knowing that once the doors were locked, they were locked for good. I wish I knew what exact day that was. I do know that the film we saw wasn’t released until March 1990, so it would have been after that. It’s a shame this town sucks so bad now. It used to be fun. Now they just tear history down and build another CVS Pharmacy. This is not the same town I grew up in. It’s now full of crime and drugs. It’s really sad. This town used to have NINE movie theaters and FOUR drive-ins. Can you believe that?