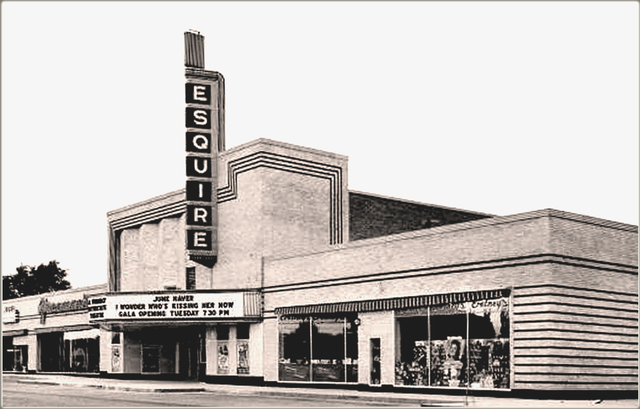 The only Esquire I knew in Amarillo was at 19th and Washington (by I-40). As a child in the 60s, my mother took me to see To Kill a Mockingbird and The Sound of Music there. In college in the 70s, it was the theater that had the Rocky Horror Picture Show every weekend so I continued to go there. Then in the 80s I lived close by and remember seeing that Ringo Starr caveman movie there, among others. The theater was just second run movies, but still a beauty with murals of cowboys herding cows in the Palo Duro Canyon on the walls. When it closed in the mid-80s, their last show was, once again, The Sound of Music and my mother and I went to see it to preserve those good memories of a beautiful theater. It is the only Amarillo theater that I remember before the multiplexes moved in.

I worked at the Esquire in high school from 1968-1971 as an usher and Assistant Manager. We ran a lot of the major films during that time period. The Esquire, Paramount and State theatres were all part of the ABC Interstate Theatres chain. The manager at that time was James Arnold, and most of the employees attended Amarillo High or Tascosa. Joe V.

A movie ad from 1963 for the Esquire Theatre in Amarillo.

Like the Paramount not enough can ever be said about this wonderful theater. I saw my first movie there October 12, 1966, “KHARTOUM”, the last was “CAVEMAN” April 20, 1981. I only got to see 59 movies at the Esquire. Then it was torn down in ‘82. What’s wrong with you earth people? At least they didn’t make a flat, ugly parking lot out of it.

Interstate Theatres went on a building and spending spree in the late 1940s building theaters outside of downtown throughout Texas. In 1947, alone, Houston had the River Oaks, Dallas got the Forest, Inwood and Circle theaters. And for Amarillo, it would get its last indoor theater built for more than 20 years with the Esquire Theatre. You couldn’t miss the Esquire. It had a 38-foot sign with 1,500 feet of neon tubing and an attraction board that told you what was playing. Opening was the 40 cent admissioned, “I Wonder Who’s Kissing Her Now” on October 27, 1947. Mayor Lawrence Hagy was there to get things going. Audiences were struck by the fabulous murals by Eugene Gilboe which were a doff of the cowboy hat to the Palo Duro Canyon area.

Nicknamed “the friendly theater,” by Jack King of Interstate Theatre, the only circuit to operate the theater, the idea may have been to be a nice neighborhood theater. But at 1,000 seats and with audiences ready, the theater at 18th and South Washington within two years was hosting road shows that Interstate might have considered for the Paramount. Road Show releases including those of “Hamlet,” “The Bible,” “The Sound of Music” (18 weeks), “The Royal Ballet,” “South Pacific,” “Around the World in 80 Days,” “Cheyenne Autumn,” “The Song of Norway,” “Patton,” “Tora, Tora, Tora,” “Oliver,” “The Sand Pebbles,” “Gone With the Wind (1968 Road Show), “The Taming of the Shrew,” “Grand Prix,” “A Man for All Seasons,” “The Great Race,” and “The Magnificent Men in Their Flying Machines” made the Esquire a destination theater for decades.

Though the theater would close just shy of its 35th Anniversary reaching the end of a lease cycle, the quickly-demolished theater was a destination theater in the single-screen era and survived gracefully into the twin and multiplex eras.

I watched Benji over and over again all day on Saturday. I loved the Esquire. I got to see Midway in sensorsound when it premiered. It was the first movie in sensorsound. Now every time I watch Midway, it brings me back to the Esquire!

I saw many movies at the Esquire including OH, GOD!, GREASE, and SLEEPING BEAUTY during its 1979 rerelease. The auditorium had a mural painted on the ceiling, as well as a balcony. The last movie shown there was THE SOUND OF MUSIC in 1981.

Pokeyslow the first movie with Sensurround was Earthquake in 1974. Midway was released in 1976. Both had sensurround. Earthquake played at the Mann Fox. I was the relief projectionist at the Fox.

On December 27, 1957, 2 14-year-olds have admitted that they set off a homemade bomb that was normally been planned 3 months prior as it was made out of firecrackers, BB pellets, and a cardboard. They were later arrested at a drive-in cafe. The two said that the placing of the bomb was set at front of the Esquire Theatre which were showing a Walt Disney film at that time filled with a crowd, mostly teenagers and children, but they did not want to injure anyone and put it where they did not believe anyone would be sitting. The bomb had a short firecracker fuse and several inches of slow burning string. It exploded about 20 minutes after it lit. The explosion described as a blinding orange and red flash, and threw one youth from his seat and blew a cushion 15 feet. This caused a bit of damage. The Interstate chain had offered a $1,000 reward right after the blast.