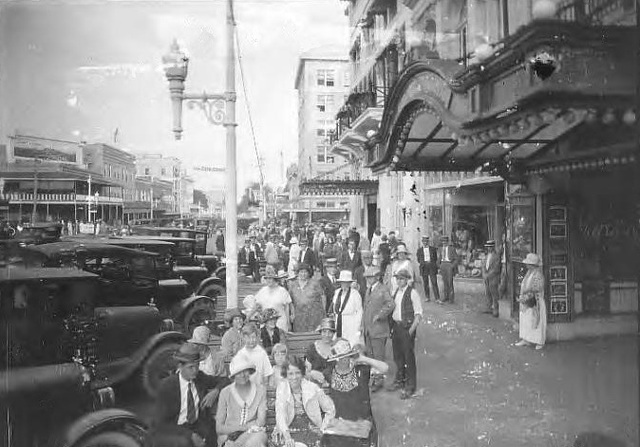 Only briefly read about this theatre that once existed in St Petersburg, FL. It opened February 20, 1919. The auditorium had a domed ceiling with cherubs. It was equipped with a ‘large’ pipe organ which was opened by organist Dr. Minor C. Baldwin. The organ was found to be inadequate, and in 1924 it was replaced by a Wurlitzer 2 manual 4 ranks instrument. The Pheil Theatre was closed on November 18, 1959 with Dick Miller in “A Bucket of Blood” & Yvette Vickers in “Attack of the Giant leeches”. It was almost immediately demolished to make way for a First National Bank building.

Anyone ever heard of the Hance Detective Agency that was at 841 Central ave during the 1920'?

This is a picture I took of the former bank building—and, apparently, the remains of the Pheil—in June 2010.

The cool thing about the Pheil was that the entrance was UNDER the screen. You’d walk in the front door and the movie would be playing above your head. Saw many a Japanese and/or low budget monster movie there in the late 50s.

It was the only movie theater I’ve ever been in where you walked in under the screen. I remember seeing “The Mysterians” there.

This was an interesting theatre. It was part of the PHEIL HOTEL building and, as stated, you entered under the screen. The projection booth was built out over an alley. The story told by even older members than me of the IATSE local was that when the booth equipment was delivered, the workmen wanted to know if the booth equipment should be delivered to the booth. When asked that question the response was, “Booth ? What booth ?” because the theatre had no projection booth and that was why it was built hanging out over an alley. Now, I do not know if that is a true story or not but it sure sounds good.

Does anyone have any pictures of the auditorium?

While the above two-sentence entry succinctly describes the Pheil Theatre and its 40-year history in downtown St. Petersburg - and that two sentence synopsis should be retained as is - the Pheil Theatre and Hotel Building might best be remembered for its presence symbolizing the city’s growth from single- and double-storied wood-framed downtown structures to modern skyscrapers associated with perhaps more cutting-edge cities nearby and beyond. Some details of the theater and its adjoining hotel’s history follow.

Abram C. Pheil first announced the Pheil Theatre in August of 1917. Pheil had a significant role in the growth of St Petersburg during Florida’s “land boom” in the 1910s and 1920s. Pheil was the first passenger on the first commercial flight in 1914 from St. Pete to Tampa in 1914. He also removed an island in Bayboro Harbor to ease waterway navigation. He announced his intention to build in the 400-block of Central way back in 1905. His plans continued to balloon and he acquired more lots from 410 to 424 Central. The skyscraper concept was announced in 1916 but began much more modestly with a theater to bear his name that was built beginning in 1917. The Pheil Theatre’s entry was constructed with a temporary wooden shed built to protect pedestrians on Central Avenue from falling debris. It was apparently a necessary but unsightly structure in 1917.

Work on the theater continued in 1918 as a domed structure (see photos). Brooklyn artist Josh Gutchbar worked overtime on the hand-painted 20' dome of the auditorium that was a mural of the sky with cherubs, along with its figurines representing happiness, sadness, pleasure and pain. The screen featured figurines on either side representing work and recreation. The color scheme was ivory and grey with rose drapes. And a large $12,000 pipe organ was installed comparable to the “big city” theaters yet likely not actually meeting that expectation as it was replaced by a mighty Wurlitzer 135 organ (Opus 756, 4 ranks and two manuals) just four years later during a late 1923 refresh.

The Pheil Theatre may be remembered for its small Central Avenue footprint that had a 25' lobby to its back that included a 20' dome allowed the venue to house the projector in the alley allowing people to enter and exit screen-side. The “reverse entry” concept was an innovation designed by the theater’s architect and collaborated to by the theater’s first manager. More importantly, the venue’s foundation allowed for growth as Pheil’s architect, William S. Shull, ensured that it could support a ten-story building if needed in the future. So certain were these plans, that the temporary wooden shed remained in place as the theater prepared its 1918 launch that was delayed until 1918.

The dangers of nitrate film presentation were very well known at the time of designing the building and safety was taken into consideration as the building’s materials were almost entirely wood free save some doors and some ornamental trim. This was a move certainly designed to ease the insurer’s minds. In fact, the original architect and theater manager said that in case of a fire, people would have the option of a natural egress following the “decline” slope of the auditoriums to the familiar Central Avenue front or selecting a back egress into the alley. The theater’s concrete and steel reinforced fireproof projection booth was built up over the rear exit and over the alley. A 1920 booth fire led to a slight reworking of that booth and some interior refinements to the venue.

The long-awaited Pheil Theatre opened February 20, 1919 with Dr. Minor C. Baldwin at the pipe organ and soloist Gretchen Miller as the vocalist. Then St. Pete Mayor Al Lang made the opening speech with followed by Major Lew B. Brown, Postmaster W.L. Straub and former St. Pete Mayor, City Council member now theater owner Pheil (1912-3) making remarks. The venue operated thereafter on a grind policy with continuous shows from 1-10:30p daily. Patrons long remembered coming in during the continuous showings because seated ticket holders would see everyone who entered as they came up through the screen area.

The Pheil would be guided by numerous operators including Southern Enterprises under Paramount beginning in 1920, briefly under Consolidated Theatres and the bulk of its time under E.J. Sparks Enterprises circuit beginning in 1927, and closing under Florida State Theatres when associates of the retiring Sparks took over the Circuit on July 1,1941 through November of 1959.

The theatre was also remembered for the giant Pheil Hotel that would be associated with it for decades. In 1920, Pheil obtained a permit to add the ten-story hotel on to the theatre’s Central Avenue entry along with ground floor businesses to either side. That temporary shed that had been constructed 1917 would remain in place as the hotel was built in 1920 with a targeted opening date in 1921. Or longer as it turned out.

On April 21, 1924, the Pheil Theatre – still in continuous operation and with the unfinished hotel above it - handed out what were described as “funny pairs” of red and green glasses as it presented its first ever 3D films. To those who had seen 3D stereopticon still images, the effect was a predictable advance but yet an innovative presentation. The theatre closed for the summer and received a refresh bringing improved projection and its new Wurlitzer.

Meanwhile, in the hotel project’s fourth full year of construction, a dual marquee was installed in July of 1924 - one for the hotel and one an improved attractor for the Pheil Theatre. This allowed the removal of that nearly seven-year old eyesore, the temporary wooden shed. The shed’s removal – in and of itself – was an actual news story. A large smokestack was added to the building’s roof in part functionary and in part, apparently, to stake its claim as the city’s tallest structure.

On the second anniversary of his death and some three years behind schedule, R.L. Thorn / Thorn Brothers opened the hotel bearing Abram C. Pheil’s name. The facility was known as the Pheil Theatre and Hotel Building. Hundreds of photos and post cards show the hotel and the theater’s Central Avenue entry. Yet few actually show the theater on its backside. The theatre would continue to innovate becoming only the second theater in the state of Florida to equip with sound and the first in the U.S.A. in a city with fewer than 50,000 residents relaunching on November 11, 1927 with Vitaphone sound. Opening the talkies era at the Pheil were associated shorts and the synchronized sounds of John Barrymore in “When a Man Loves.” And the audiences loudly cheered with approval setting the wheels in motion for other St. Petersburg theaters to equip for sound in 1928. The Pheil followed that up by booking the World Premiere of “Glorious Betsy” with Vitaphone on April 7, 1928.

Once better theaters had sound, the Pheil scuffled during the Depression which included summer closures and reduction to three-day a week operation. It was closed due to lack of business from June of 1929 to early 1930. The theater came back to life operating seasonally. Its 1934 lasted all summer all the way to Christmas of 1934. The Pheil’s new 20-year leasing period began in 1939 under E.J. Sparks but transferred to the renamed Florida State Theatres in 1941. The theatre’s summer closures continued through 1953. The theatre had announced a plan for air conditioning in 1949 that was finally carried out in 1954 by its final operator Florida State Theatres. Florida State also converted the venue to widescreen projection for the purpose of showing CinemaScope films in 1954.

Operating year-round, Florida State operated the venue until the end of the Pheil’s second, 20-year lease. It closed permanently on November 18, 1959 with Dick Miller in ”A Bucket of Blood” and Yvette Vickers in “Attack of the Giant Leeches.” The Cuyahoga Wrecking Company commenced demolition days later continuing into 1960 in demolishing the Pheil in favor of a new First National Bank. That project that lasted from 1960 to 1968 were the first changes for the commercial area since its World War I era construction and also a time that the Pheil would lose its distinction as the city’s tallest building.

High winds destroyed windows in November 1959 even prior to the wrecker’s work. Its entry way and attractor signage on Commerce Street was converted during a major overhaul of the Pheil Hotel property which received a new aluminum Brise Soleil screen wrapping as the building was known as the “cheese grater” for the next 45 years or - officially - as the Madison Hotel toward its new 99-year lease.

The Pheil turned Madison Hotel closed on May 31, 1973. A disposal sale offered everything in the hotel at exceedingly low prices. In that were apparently some of the figurines from the former theater’s lobby. The plan was to raze the hotel in 1973 and 1974. Its demolition was delayed just slightly as the vacant building was finally razed… in 2016. Preservationists efforts to save the structure were simply too late in coming.

For the very unlikely few who care, the Pheil Theatre entry and official address was at 412 Central in the middle of the building and not at the 424 Central address Cinema Treasures uses above. 424 was the entry and address of the Pheil Hotel whose entry was at the right-most side of the property. After the theater was demolished, the former theater entry’s address became 410 Central which - though technically incorrect - is the lowest address associated with the property at 410-424 Central at the left-most side of the property. However, the 424 Central address above is certainly more than close enough as it was within the same structure and works great for mapping purposes.