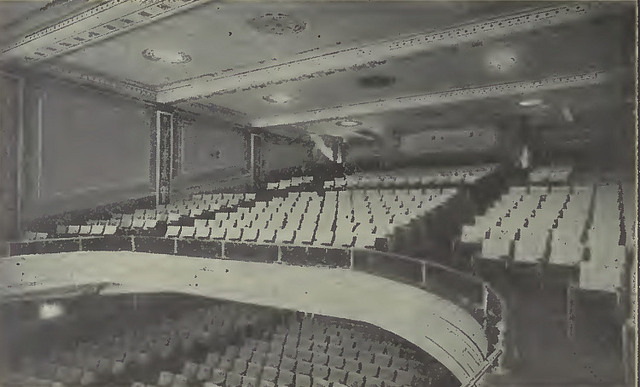 Located on the corner of 11th Avenue and 14th Street, the Gamble Theatre was opened on March 8, 1913. It had 700-seats and was designed in a Moorish style by architect Julien Millard. In 1918 it was taken over by Publix. It was closed on July 23, 1919. It was renovated and reopened as the New Victoria Theatre on November 15, 1919. In 1921 it was taken over by Anast N. Notopoulos and was remodeled in a Greek Revival style by architects Sholler & Hersh, reopening as the Capitol Theatre on March 17. 1921.

The Capitol Theatre was still open in 1962.

The Capitol must have been the planned theater mentioned in the “Building News” section of the July 24, 1912, issue of The American Architect: “Altoona.-Architect Julian Millard is drawing plans for a theater to be erected for Gamble Bros, on the site of the property at the corner of Eleventh Ave. and Fourteenth St. Cost, $25,000.”

The Altoona Tribune of March 18, 1921, said that the rebuilt Capitol Theatre building was designed by the local architectural firm Hersh & Shollar.

It should be noted that Frank Austin Hersh and Frederick James Shollar formed and disbanded their partnership more than once. From 1904 to about 1916 the firm was called Shollar & Hersh, and after a hiatus of a couple of years, they re-formed the firm but called it Hersh & Shollar. Thus Altoona’s Olympic Theatre of 1914 was designed by Shollar & Hersh, but the 1921 rebuild of the Capitol was by Hersh & Shollar.

The Gamble Brothers, Robert and Andy, had an early regional circuit of silent film houses in Central Pennsylvania including Huntingdon and the Grand in Altoona. In 1912, Architect Julian Millard of Altoona drew the plans of a new Moorish styled theatre for the Gambles. It opened as a 700-seat theatre and was designed to be added to so that it, in the future, could be a skyscraper. The facility featured a Wurlitzer automatic orchestra which purportedly was the larges musical instrument every installed outside of the pipe organ in Wanamaker’s Department Store in Philadelphia. With an admission price of just a nickel, the Gambles hoped that quantity would pay for the building.

The new Gamble Theatre launched March 8, 1913 with motion pictures and live music. But in 1918, the Gamble Brothers sold their theatres and went into the auto industry before Andy came back into the movie business a decade later. The Gamble became the Gamble-Paramount operated by Publix circuit.

Anast N. Notopoulos took on the Gamble-Paramount in 1919 closing it July 23, 1919 for a major refresh. He gave it an entirely new interior and exterior look and renamed it the New Victora Theatre opening on November 15, 1919 for what turned out to be a temporary stay of just over a year. The new Victoria’s opening film was Douglas Fairbanks starring in “The Knickerbocker Buckaroo.” It now had a gold fibre screen surrounded by purple velvet. It received a horseshoe-shaped balcony that was in the original plans but never executed.

But Notopoulous would have bigger ideas for the Victoria. Creating a steel interior and new look by local architect Walter Frieling a new, New Victoria would return there and, later, be taken over by Wilmer & Vincent and converted to the long-running State Theatre.) Meanwhile, the Gamble/short-term New Victoria Theatre would become the Capitol Theatre opening now with a Greek architectural theme by Sholler & Hersh and the film, “Behold My Wife,” on March 17, 1921. The Capitol installed sound and then widescreen to stay competitive . The theatre appears to have closed June 28, 1963 with “The Nutty Professor.”