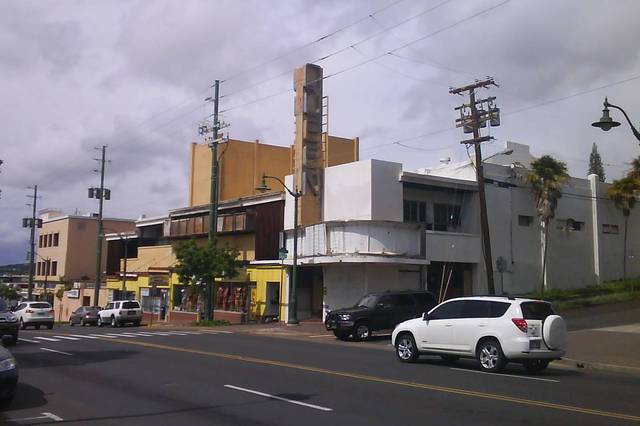 A neat theater in Honolulu’s Kaimuki neighborhood with a stage, fly tower, and dressing rooms for live shows. The Queen Theater was opened June 29, 1936 with Clive Brook in “Loves of a Dictator” on the screen and “The Milky Way” performed by the Hollywood Players on the stage.

Became a second run theater and was showing midnight “Rocky Horror Picture Show” shows for a while before closing.

thanks Jim for the update.

When I was a high school student in the mid fifties, the Queen used to be a art house and I remember seeing a lot of them at that theatre. In the late fifties, the theatre was made into a first run venue by Royal Theatres. A 70mm-Six stereo system was installed for the showing of Disney’s SLEEPING BEAUTY and I saw it and it was fantastic. The theatre was also Royal’s only road show venue and THE LION IN WINTER and PAINT YOUR WAGON played there as reserved seat engagements.

I remember “Sleeping Beauty” there too. The line of kids went several blocks up Center Street. They must’ve been letting them in for a nickel apiece because Disney didn’t make too much money from that movie the first time around. Something like “Frozen” was way beyond anybody’s imagination.

Plan to restore historic Queen Theater set in motion. Nothing is happening yet but it’s the biggest news the Queen has had in 30 years.

Friends of the Queen Theatre provides this web page with a brief history of the house. It says that the Queen was built by Franklin Theatrical Enterprises, operators of the King Theatre in downtown Honolulu, and was opened on June 29, 1936. It was designed by local architect Lyman Bigelow.

June 29th, 1936 grand opening ad in the photo section and below

Sadly abandoned and destine to demolition or conversion into retail.