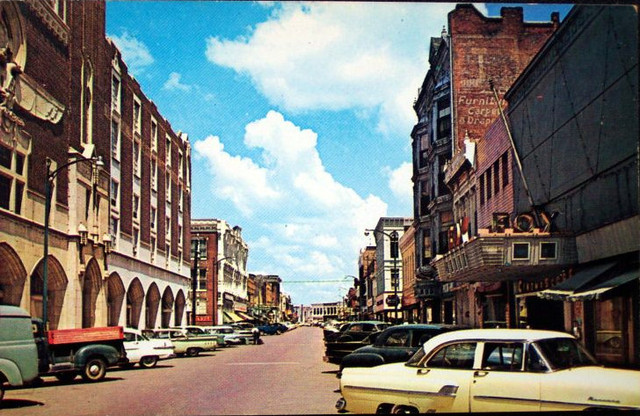 Located on S. Main Street and E. First Street. The Liberty Theatre originally opened July 1, 1919 as a single screen theatre with a balcony. In January 1952 it was renamed Fox Midwest Theatre. By 1955 it had reverted back to the Liberty Theatre name. It was was later twinned. It was open showing first run attractions until around 2006.

By 2009, it had been restored and now offers live performances and special events.

Listed in Film Daily Yearbook; 1941 and 1943 edition as the Liberty Theatre with a seating capacity of 700. Operated by Fox Midwest Amusement Corp. The 1950 edition of F.D.Y. gives the Liberty seating 752.

I saw a ton of movies here during the eighties. A one time it was a single screen, after a fire in the building next door, in which the theater sustain some damage it opened as a twin. It had a small game room of to the side of the main entrance. Name any major movie during the eighties and its a safe bet I saw it here. The last time I was there in the late nineties the theater was in terrible shape. Whole rows of seating were missing, the projectors were constantly breaking down, and the place was in need of some major renovation.

From 2010 a photo of the Liberty Theatre building in Fort Scott.

The July 2, 1919, issue of The Fort Scott Tribune told of the successful opening of the new Liberty Theatre the previous night. The June 30 issue of the paper had said that the new theater, owned by H. L. Stout, had taken nearly a year to complete due to the difficulty of obtaining structural steel during and after the war.

The Liberty occupied an 1889 commercial building that had been gutted and the interior completely rebuilt into an 800 seat theater with complete stage facilities. Mr. Stout’s intention was to operate the Liberty primarily as a movie house, but he had also arranged to present stage productions provided by the Klaw & Erlinger and Shubert syndicates.

This must have been when it was renamed the Fox. Motion Picture Herald, Jan. 19, 1952: “Several (Kansas City) Film Row people went to Fort Scott, Kansas, for the opening of the Fox Midwest theatre there.”